Ya gotta love an evil plan… 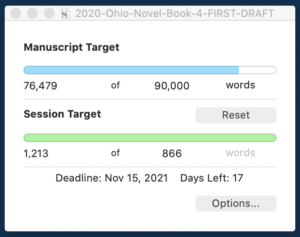 …And in Book 4 of the Ohio Series, way toward the end, (where I only have about 14,000 words left to finish the damn thing…

The Evil Plan just crawled out of the woodwork.

Not just for my characters.

I’m at roughly seventy-six thousand words in the FOURTH book of the series, with only one more book to go to wrap SERIES ONE…

And NOW the monsters let me know what they’re up to?!

And while I know my brain does this shit all the time, and while I know that no matter what I’ve planned, my subconscious mind is going to be actively working to make all of that feel too stale and too small when it hits me with its next bit of better…

It’s still always a shock when it happens.

So. Today was… AWESOME!

And even more so because there’s not a single thing that landed on my head today that’s going to have to be retrofitted into the nearly 400,000 words I’ve already done.

I’m all about the HAPPY DANCE today, lemme tell you.

Now, I’m off to work on the HollysWritingClasses.com replacement website for the next four or five hours. Wish me luck.

[And for my writing students following this blog, I’m not going to flog the current class discounts via email. I am going to say here that prices on the classes are going to return to normal as soon as the new version of the site goes live. And that is going to be AS SOON AS WE CAN MAKE IT HAPPEN, BECAUSE our old software is now way too creaky and old to keep using.]

Anyway… Have a wonderful weekend, and I’ll see you in here next Monday.

Next post: I’m looking good to beat my deadline on Ohio #4

Previous post: Good words, and a lot of other stuff.