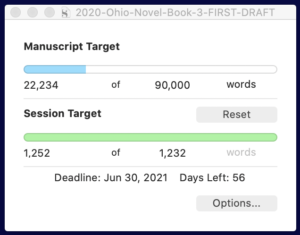 My main character was in full force today. Yesterday’s gutting of the wrong words gave me the space I needed to get the right ones, and my three hours flew.

I mention in a previous post having dreamt of my half-sister (who died some years ago) being with me… and today she stepped into the story, not as she was, but as she could have been and would have been had life and the circumstances of her birth been kinder.

She is in trouble, of course (because she’s in important character in a novel written by me). She won’t be named Julie — naming her that wouldn’t fit the story, the world I’ve created, or who she was in real life — and I will not erase who she was in real life, because as long as I knew her, she did her best at everything she tried.

In my memory, she lives as she was — I will not erase the truth of her.

In the novel, she’ll live as she might have been in a world that was kinder to her and considerably more magical than this one.

Now, on to other things.

Next post: Today, the big cuts paid off big — the combat accountant, the buddy assassin, and 1254 words