My fabulous How To Think Sideways Boot Camp moderators came up with the following wonderful idea, here quoted from Katharina Gerlach’s post on the forum:

I have been thinking about an anthology with the best stories from Holly’s students for a while. Now, I contacted Holly and she agrees that this is a good idea. Since she’s momentarily extremely busy with setting up the new site-software, I will be in charge for a while.

The rules are as follows:

This was a no-entry-fee anthology. I wrote a foreword, judged the entries, and set aside money for the prizes:

Katharina (Cat-Gerlach on the boards) did the cover art and the award images, which winners can use on the covers for their stories or story anthologies, as well as on their websites. 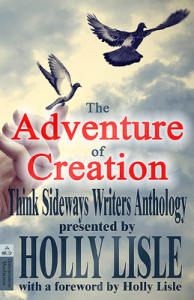 The anthology will be published on the 24th of July 2013.

I judged the entries, and it took me three rounds of judging, with the first round judged on a point system in which each story could earn points for Characters, Conflict, Setting, Twist, Theme, and Technique.

I’ll note that the thirty-five stories chosen by the editors were sent to me in “blind” format—in other words, I had no idea who had written them—and about two thirds of the entries were only a point or two away from perfect scores by the time I’d finished my first round. The editors, Cat-Gerlach, Texanne, Pearannoyed, and Marti-V, had done a magnificent job of choosing from the many, many stories submitted.

The following stories had perfect scores in the first round:

These twelve stories went on to the second round, where I judged by the subjective test of “greatest relevance to anthology theme.”

The following five stories made it into the third round of judging:

The job of the first story in an anthology is to bring in the reader.

The job of the second story in an anthology is to give a reader an idea of the range of tone and content within the rest of the anthology.

And the job of the anchor (or final story) is to convince the reader that he wants the NEXT anthology in the series.

Based on that, I read through the final five stories several times, having a hell of a time deciding. I finally got there, though. Here, in reverse order, are the honorable mentions and the winners.

Winners will receive their prizes via PayPal. You’ll be privately contacted by me before I send your prizes so I can confirm your PayPal address.

Finally, there is no guarantee that there will be a second anthology:

Authors will be paid pro-rata for their stories out of sales.

I donated the prizes out of my own pocket, so the anthology doesn’t have to earn that back first.

But the anthology does have to gain enough of a readership to make the amount of work it took to create it worthwhile for the writers and moderators involved, in terms of both public exposure of their work, and to a somewhat lesser extent, financially.

If you would like to participate in a similar anthology contest next year, or to support continuing HTTS Boot Camp anthologies, please purchase The Adventure Of Creation: Think Sideways Writers Anthology when it comes out on July 24th. And please pass on the word to fellow readers.

I’ll send a reminder with links when it goes live.

Next post: The Adventure Of Creation: Think Sideways Writers Anthology, Is Live #readers