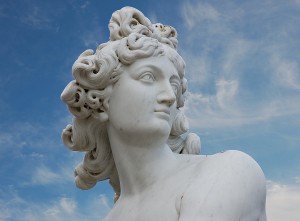 Venus on Alert in Ancient Pompeii

I have been doggedly trying to find out more about the Roman Republic (pre-Caesars, pre-decline, pre-depravity). It’s almost impossible. The Romans were a successful self-governing people with a working republic for five hundred years and change, but damn near every resource I can locate begins at the point where their corrupt senators handed over control to individual despots and everything went to hell. I want to know how they succeeded for five hundred years. I think Americans, as a self-governing people, might all want to know that.But no. Apparently everyone else only wants to know how they failed.

Anyway, I was watching a history of the excavation of Pompeii. My husband was half-watching, but at the same time discussing with our son the sensationalist structure of the show we were watching and its emphasis on destruction and depravity, with the documentary collectivist mindset of “this was all the Roman people lumped into one vast generalization,” rather than “this was a one-day snapshot of the lives of some rich Romans on vacation.”

Watching the show, listening to my husband and son, an object I couldn’t quite believe passed before my eyes.

I said, “Dude, stop. Whoa, stop, stop, stop, you gotta see this. Back it up.” My husband did the Manly Remote Thing, and backed up the documentary. He didn’t have to ask me where to stop. The object on display for just that instant was a bronze phallus. Sort of. It was a bronze phallus with legs and feet, wings, a tail that ended in another phallus…and the phallus had its own phallus, neatly situated between its legs. And bells. Don’t forget the bells.

And this…er…creature…was looking around a corner.

I was laughing my ass off. My husband and son burst out laughing too.

The narrator had been droning on about the Roman equation of the phallus with luck, and here was this amazing, beautifully finished, exquisitely detailed, frikkin’ hilarious piece of artwork that some dude one day before 79 AD had created, and the massive bore of a historian and the flat-voiced narrator didn’t stop for so much as a giggle. They were intent on turning this goofy, delightful bit of creativity into a tedious proof of a deadly dull point, and frankly, I didn’t give a shit about the speculative Roman collective mentality regarding the significance of the phallus.

I wanted to know who the guy was who made that thing, because he was a funny, funny guy. It was the fact that he made the thing look around a corner that got me.

Bugger has been dead for pretty close to two thousand years now. And what he created made me laugh.

To me, this is history. Not who were those people, but who was that guy?

(Found a picture here: Tintinnabulum lookin’ around a corner.) (Opens in new tab.)

The questions really driving me batty:

Next post: Needed: One TALYSMANA traitor—talent, sense of humor, and backstabbing dagger required