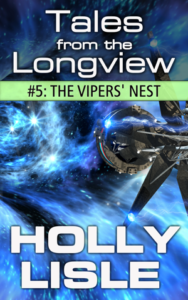 So… here it is Friday morning, July 6, and I have been working steadily for six hours a day on the bug-hunts for Vipers’ Nest every day but Monday…

Granted, as I’m getting into the bug hunts from my later folks, I’m getting a lot of repeat finds.

But I have not had one bug hunter who hasn’t found at least half a dozen “uniques” — errors no one else spotted. And I’ve had several readers who have asked smart and thoughtful questions that required me to rethink and rework portions of the story.

The story was about 32,000 words in finished revised “final” draft. Before I touch it this morning, it’s already 38,473 words. If I end up adding a smidge over 1500 more words, the damn thing becomes a novel.

And I still have five bug hunters to go.

I’ve been pulling out words, too, but they’re losing ground to the ones I’m adding.

Because the writer who gets an intelligent question about something in the story that isn’t answered (because the writer assumed prior knowledge) cannot ignore the question by saying, “Well, to find that out, you have to read the previous stories.”

The reader doesn’t have to read the previous stories. The reader can go read someone else’s stories that don’t assume prior knowledge.

So as lightly as I can, I’m including the tidbits of prior knowledge readers would need to bring in from the previous four stories, WITHOUT tipping off the reader to what happens in those stories.

The fun part of this is that, because of the way I plot, I can put in some things that some characters believe to be true (even though other characters know they are not true) so that I’m not cheating in hiding details while still making sure I don’t spoil the earlier stories for readers who DO go through them out of order.

But it’s slow and careful work, and what I thought I was going to fly through in a day or two is now at the end of my second week of doing just the story ALMOST full time.

And I already know that I’m going to have to go through this when I’m done, read it out loud, and do a final Bug-Hunt bug-hunt to eliminate new errors I’ve introduced.

You’ll be getting a better and richer story out of this. Just not this week.