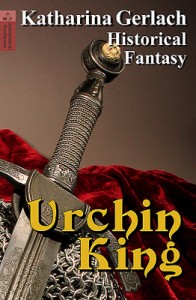 (First, I’d like to mention something the author left out of the interview. Urchin King — formerly known as Thicker Than Water — reached the shortlist of the 2010 Rocky Mountain Fiction Writer Contest (the only non-US title on the list.)

Holly: In a single sentence of thirty words or less, describe your main story, hero, conflict, and why my readers will love your book.

Katharina: As second born twin, street-urchin Paul should be dead, but instead he takes his challenged brother’s place and battles the lawmaker’s soul-devouring ghost to save his life and his family.

Holly: What is the core of this story, your passion for writing it, the reason you wrote THIS book and not something else?

Katharina: As a kid, I hated history. If anyone had told me that I might enjoy it one day, I would have laughed (at best. At worst, I would have made some rude gestures). When my best friend found an archive dating back to the 15th century in her attic (yes, her family lived in the same place for more than 600 years), I discovered there were stories behind history (maybe that’s where the ‘story’ bit of the word comes from). After that, I was hooked. By now, I have learned so much of Europe’s history that it permeates most of my stories. So when I had this flash of twin brothers separated by a law nobody dared to change, I knew it had to take part in a magically enhanced medieval Europe. From there, the idea simply wouldn’t let go of me, so I wrote it.

H: Which character do you most love, and why?

K: My favorite character in this book is the main characters brother Rupert. He’s mentally challenged and a very loving young man. His heart is the size his brain should have been. He loves his brother, his nurse, and his parents unconditionally. Although he’s slow to learn, he isn’t stupid. It just takes him longer to understand difficult concepts. I love him best because he’s the closest to a perfect human being that ever came to me during my writing.

H: What was the most difficult part of writing this book, and why?

K: This was the first book I wrote with your “How to Think Sideways” course and there wasn’t a single spot that was truly difficult. In fact, writing it was so much fun that my family found it really hard to get me away from the computer. There were a few small issues but they were easily resolved with Muse Bombs or LUC (terms students of HTTS are familiar with). With the books I wrote earlier, I would always hit a wall at some point but with this story that never happened.

H: Give me your favorite quote from your book, and then tell me just a bit about the context.

K: “As long as the king is dead, you are the king,” Sir Orran reminded Paul.
Paul shook his head. “I am not the heir to this kingdom. My elder twin Rupert is. But I will go on to pretend I am him after we saved Cordelia’s son.”

This is a snippet from way into the book when Paul (main character) finally reveals his true identity to his mentor Sir Orran. I like the way he sticks up for others although he knows he’ll be in trouble. (BTW, Cordelia is his brother’s nurse)

H: How and where can my readers find you and your work?

K: I have a website at http://www.katharinagerlach.com and a blog (linked from the website). Also, I am the initiator of the Independent Bookworm, a site aimed at readers of Fantasy, Science Fiction and Historical novels which can be found at http://www.IndependentBookworm.com

H: Thank you, Katharina. I appreciate you taking the time to tell me about your story.