Unmissable real-life voyages to the bottom of the sea 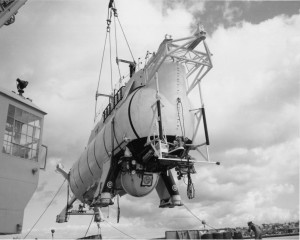 Tom Vetter and two fellow explorers fit in the tiny windowed sphere between the bathyscaphe’s front legs. Everything else was for controlling buoyancy.

My personal experiences with oceans have been in getting really bad sunburns at the beach a couple of times when I was a kid, and flying over the smaller one twice.

But starting from the age of seven, when, on a beach in North Carolina I picked up and examined a dead baby shark, a horseshoe crab, and a sand dollar that had been dragged in with a fisherman’s net, I have been fascinated by what’s in there. What’s underneath all that water.

I think it’s amazing that the majority of our planet is still a mystery, never seen by anyone, still full of things waiting to be discovered, still alien.

So when I discovered that a fellow writer—one of my students—had actually been all the way down to the bottom of the ocean—had piloted a deep submergence vessel along the abyssal floor, had developed techniques for exploring the ocean that are still in use today, and much more, I was fascinated. 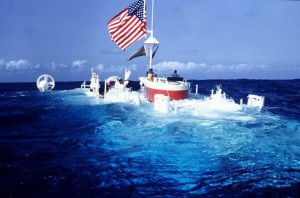 It is my honor and privilege to introduce you to my friend, Lieutenant Commander Thomas Vetter, US Navy (retired).

He is a genuine hero living an amazing life—and the dangerous, fascinating, hair-raising, and crazy things he has done so far, both in the line of duty and on his own, rival the stuff Jules Verne imagined.

Tom was a submariner and one of just a handful of men on the planet to become a hydronaut, an explorer in the other US Space program—traveling to deadly Inner Space, with atmospheric pressures that can crush steel flat in instants, to explore the sea floor, investigate what was down there, make new discoveries, and return to tell the tales.

And he tells them well.

His newest book is 30,000 Leagues Undersea: True Tales of A Submariner and Deep Submergence Pilot, and if you love adventure stories, alien worlds that really exist—complete with aliens, cool technology, and people who are willing to walk the razor’s edge of survival to push human knowledge to new heights—and how they came to be the people who can do these things—you’re going to love it.

Tom has done three readings from his adventures. To hear the first one today…

Previous post: Follow-up on my resignation from SFWA, with statement from SFWA’s president