Two Sticks and Some String, and a Cat: Building Becca’s Noro Sweater 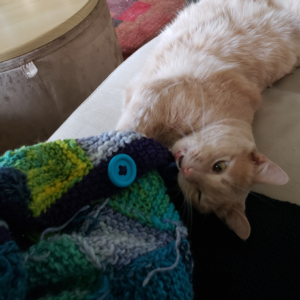 In May, my daughter Becky bought me Noro yarn for Mother’s Day. Gorgeous stuff, pure wool, the kind of yarn where you open the bag, shove your face against the yarn, inhale, and sigh with happiness. 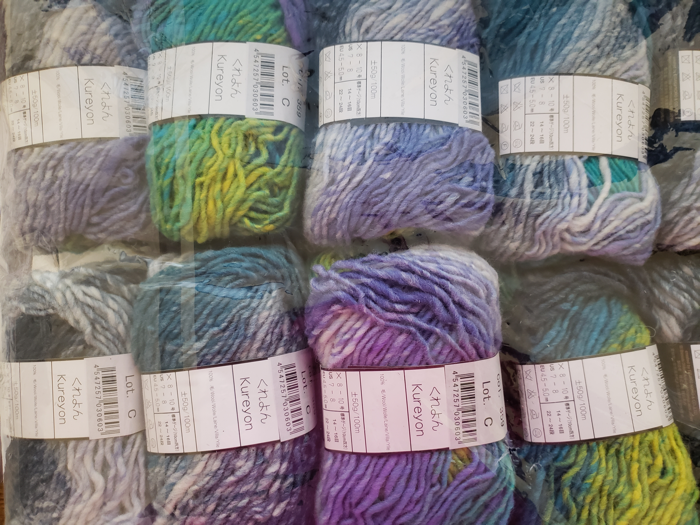 But it had to sit there for a while, because…

Well, LIFE first, and then with yarn, you have to get to know it for a while before you can start to see what it might become. (More on that in a bit.)

But in July, I had an idea of what to do with it. Nothing solid, just “Sweater for Becky.”

So I called her. Said, “Got some questions for you.”

She was wary. (Smart, my kid. Questions from mothers always require caution.)

“Pockets or no pockets.”

And that was it. I started playing with the yarn, doing some cast-ons and some rip-backs until I considered Becky.

I was walking through JoAnn Fabrics to pick up a few more knitting markers, and discovered these buttons, which were, I thought, the same colors as the Noro Becky’d gotten me.

Bought them, took them home, and… 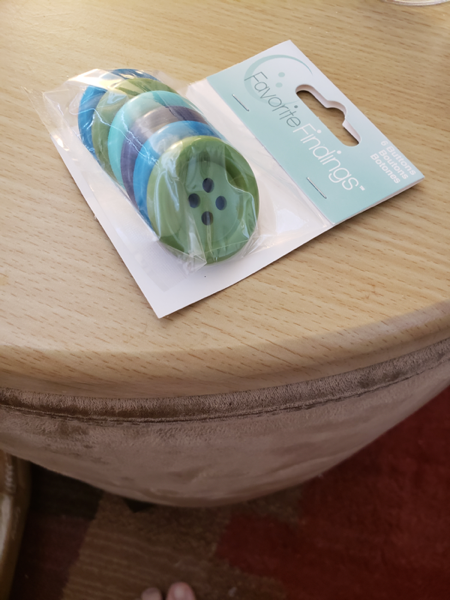 Not just perfect for the sweater. Perfect for HER. Not the same color, not tiny, not timid.

They were bright and bold and happy.

Meanwhile, the test squares had become some coherent pieces. 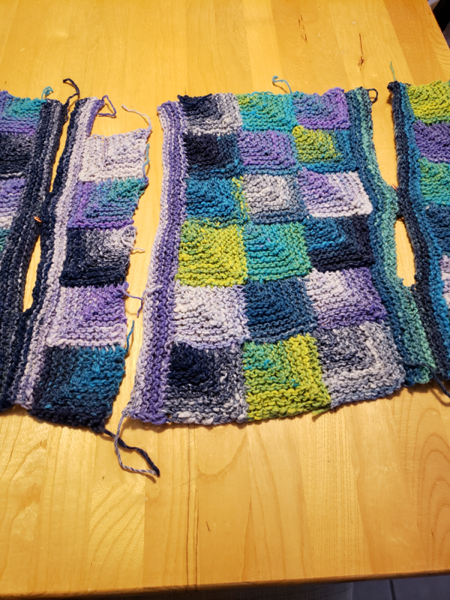 And Sheldon had taken up his position as “Associate Knitter in Charge of String Pouncing.” Note the feigned disinterest. 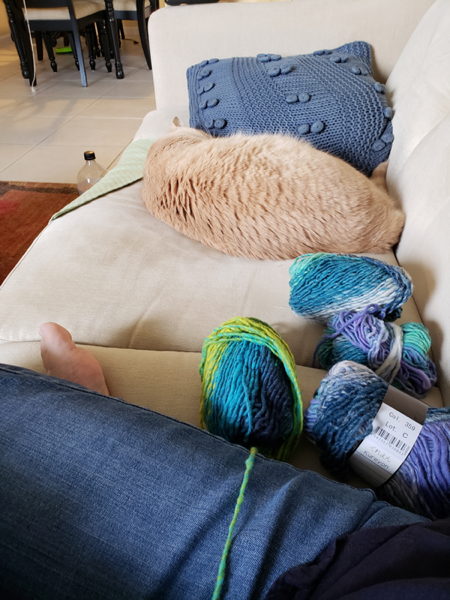 So, anyway, I got the raw body pieces together, and shoved one of the sweaters I’d made for myself inside to make sure I had the armholes and pockets in the right places.

I don’t use patterns, you see. I think up what I want the sweater to look like, I consider the couple of measurements I need to make sure it’ll fit the person I’m making in for, I test what I’m building against my numbers as I knit. It’s an always-interesting exercise in three-dimensional artifact construction, and the way I do it, it takes a little math, and sometimes a sketch on paper (though not this time), and a little twiddling at the beginning when I’m working out the bugs. 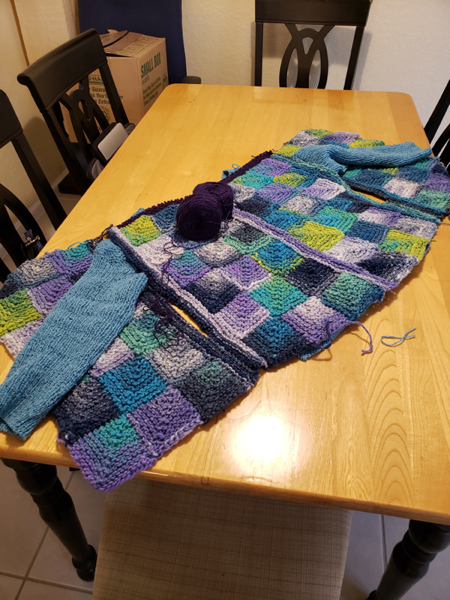 With the main body pieces made and knitted together, I discovered that I was not going to have enough yarn to finish the sweater, however… and I also discovered that Webs was out of that color, and that I couldn’t find any more elsewhere.

So I… er… “shopped the stash,” and found the very first good yarn I’d ever bought. Elspeth Lavold wool-silk, very dark purple, that back when we were living in Georgia, was my step away from Red Heart. Only not, because once I got it, I discovered that I was going to have to buy a swift and a yarn winder before I could use it, and it was sport weight, which I’d never worked with. And by the time I got the yarn winder and the swift and smaller needles, I’d discovered Noro.

So the Elspeth Lavold has been sitting in the stash for, at this point, about thirteen years.

I knitted on the left button placket with doubled Elspeth Lavold, and sewed on the buttons so I’d know where the buttonholes would go and how big they’re need to be when I moved to the other side. 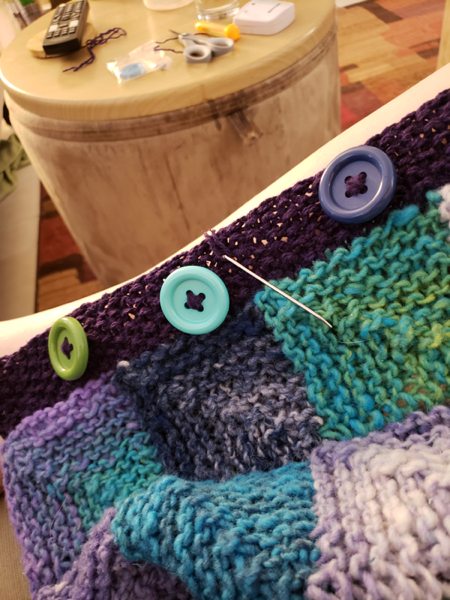 And ended up with this. 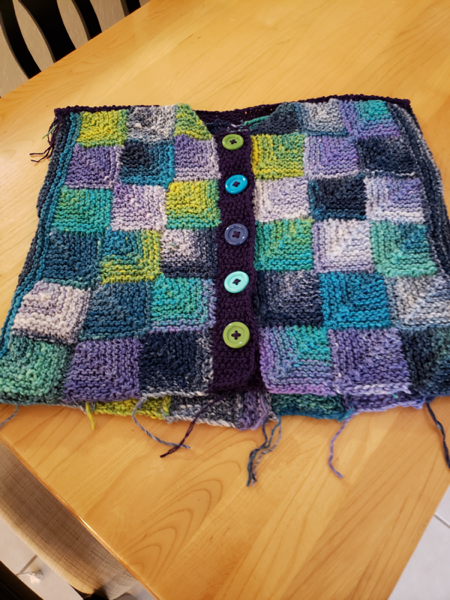 At which point my impatient daughter said, “Oooooh! Vest! I want it now.”

Vest. Is. Not. Cardigan.

I made her wait.

Figured out how to use the Elspeth Lavold for detail stuff, and started working out the sleeves. 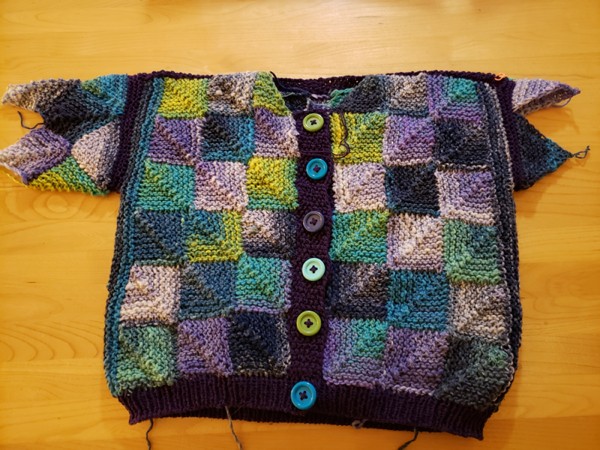 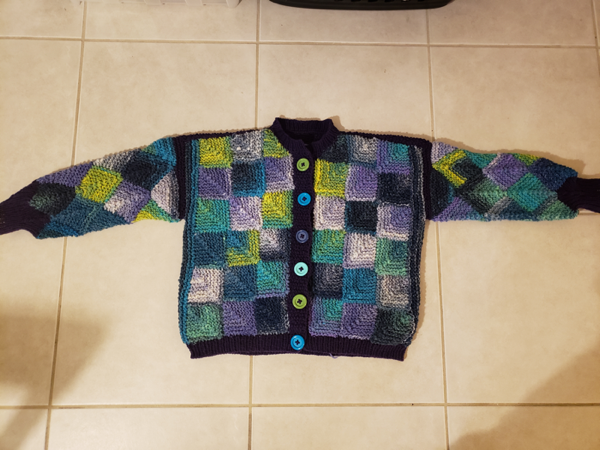 And ended with some spiffy cuffs in the Elspeth Lavold that work into the diamond shapes at the top with some fancy ribbed decreases, and finished the collar and the hem, all with Kitchener bind-offs. (Makes it look smoother and of higher quality. And is a lot of fun to do.) 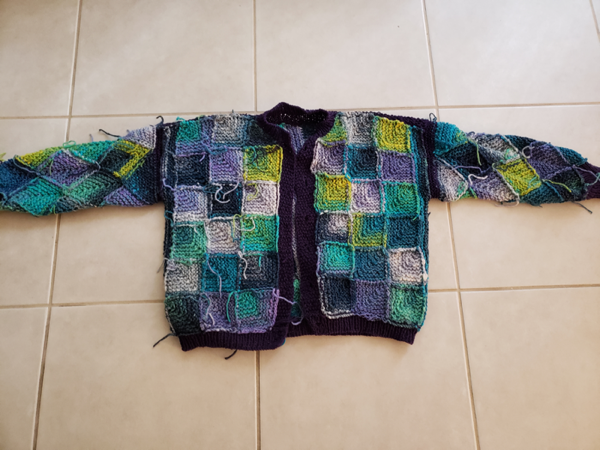 Meanwhile, I’m getting, “But I want it NooowOwwOwww!” from my impatience oldest child.

And at the point where I started sewing in ends, Sheldon, who had managed to restrain himself throughout most of the construction, suddenly lost his mind and became Lunatic Cat of Button-Chewing. 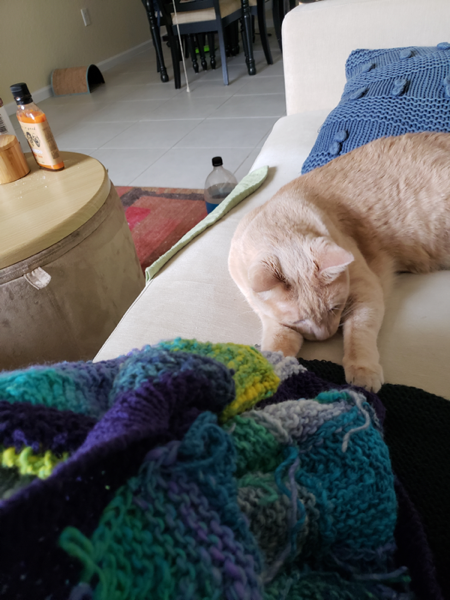 Note the pretense of being uninterested. 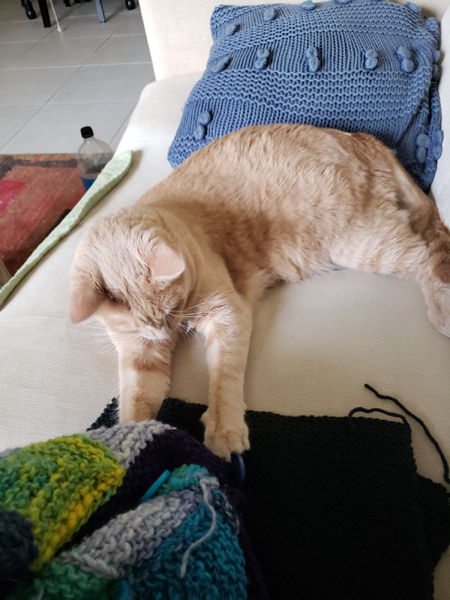 Note the little stretch that moves him closer. 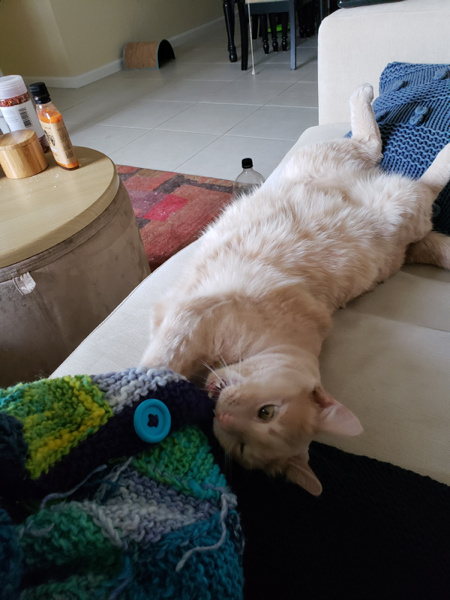 Note the button attack. In all fairness, the button did call him a name. 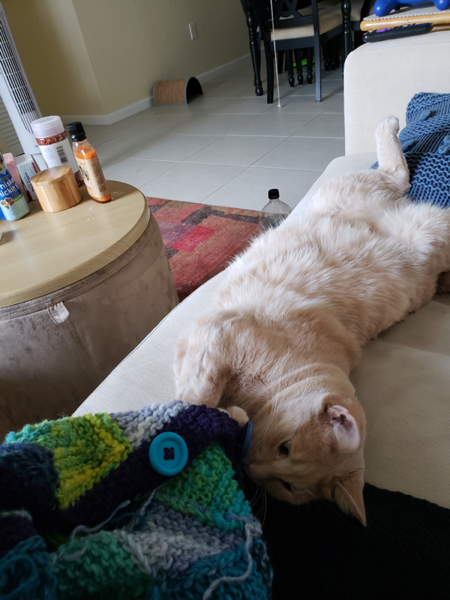 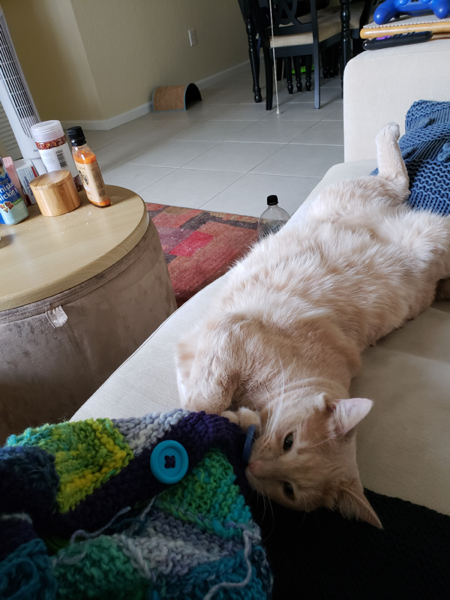 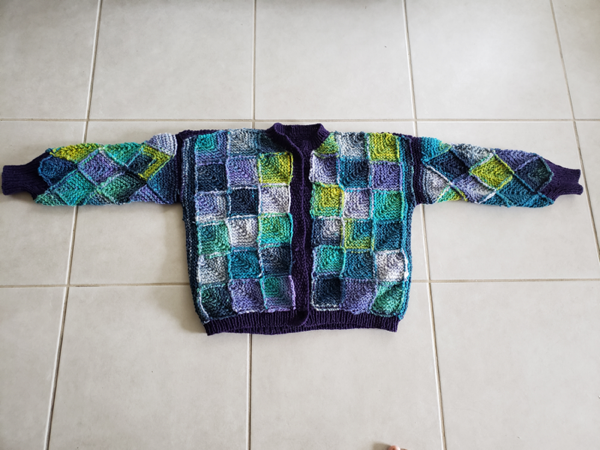 Anyway, I got the ends sewn in on the front… 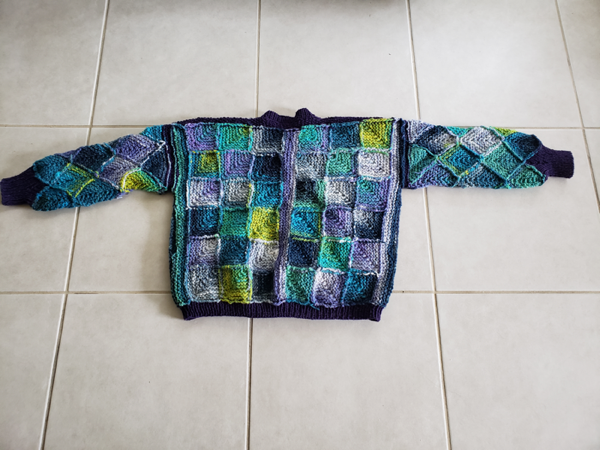 And washed and blocked it… 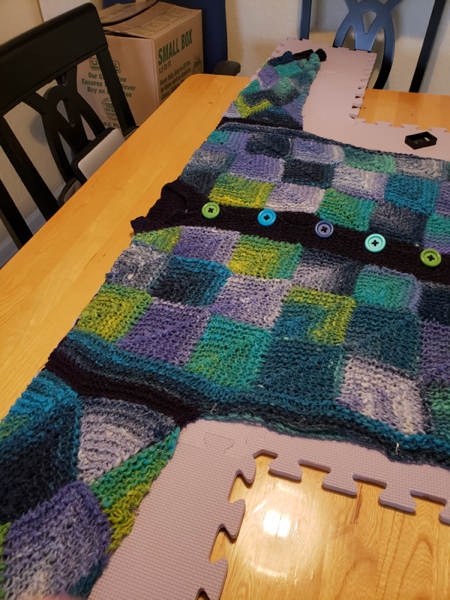 And waited three days for it to dry… 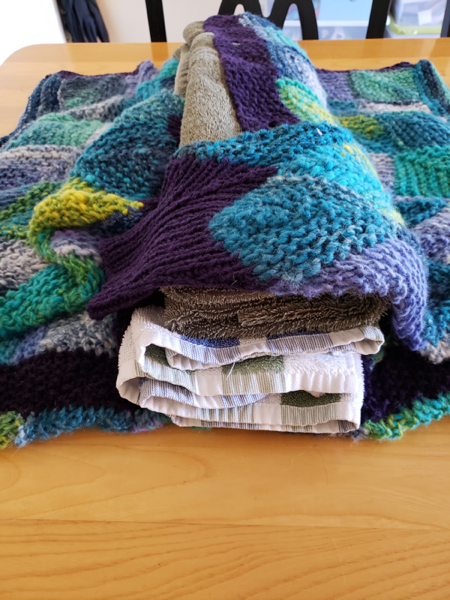 Drying with towels — the Noro dried quickly, but the Elspeth Lavold took forever.

But Still Not Done… 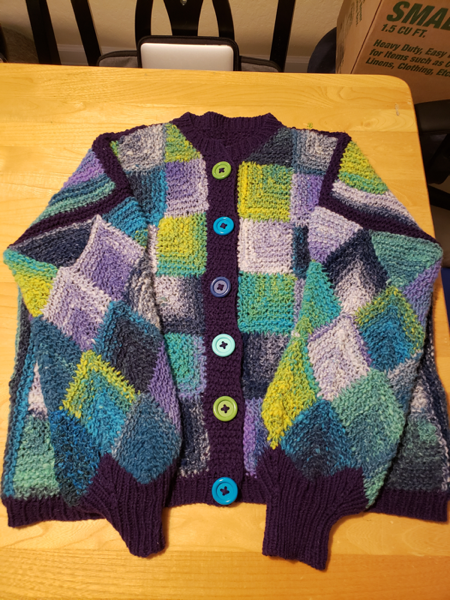 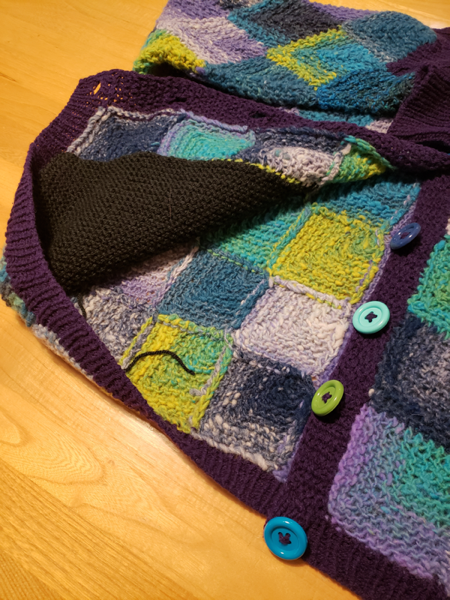 Which took an age to knit, and another age to sew in while keeping the stitches hidden from the front. 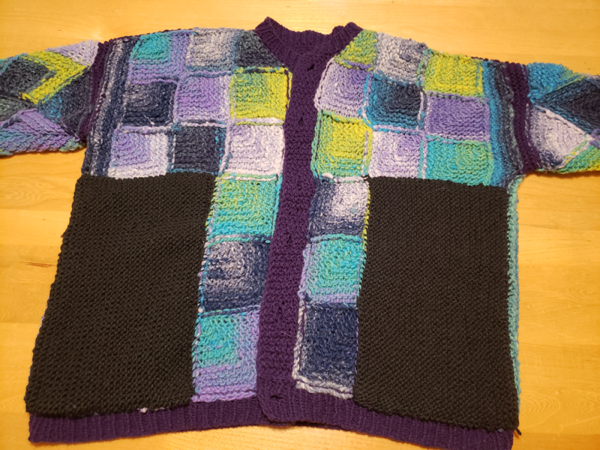 Sweater, inside out, with pockets sewn in. They’re big, and deep, and they went in AFTER I’d blocked the sweater so they would not cause any puckering. 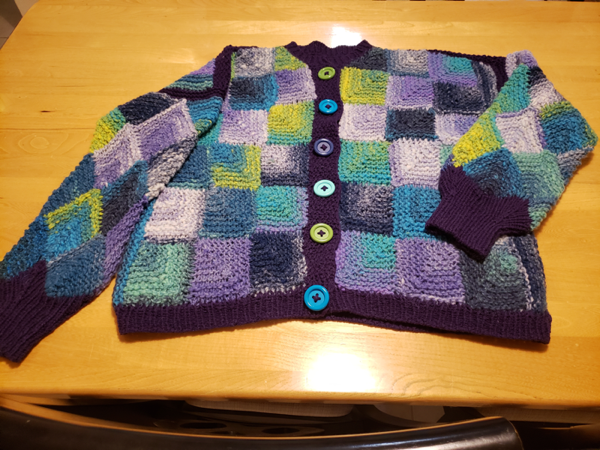 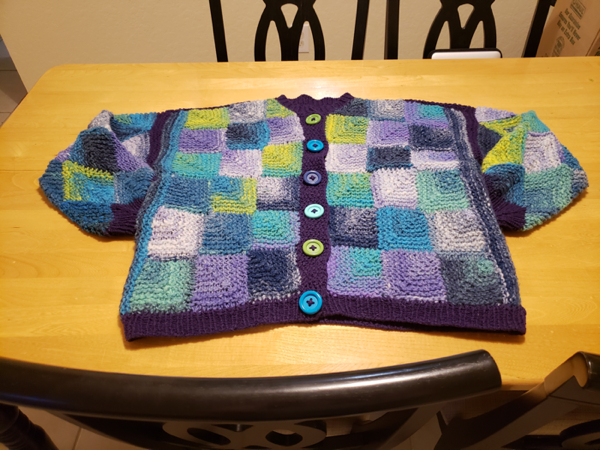 Next post: AIARWIP Episodes 4, 4.5, and 5: Brainstorming (with worksheets) & more

Previous post: 1021 words on The Owner’s Tale, and Lesson 7 of How to Write Short Stories