Trailing end of a storm, and laying the groundwork for the bigger one that follows: 1,311 words, 52,996 total 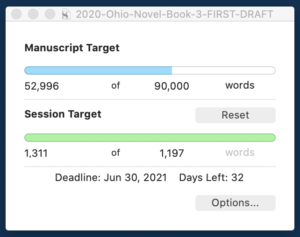 I liked today’s words. They rolled in after the yesterday’s words without too much fuss at the beginning, and left me with a nifty little twist at the end.

But tomorrow, I’m going to explode a little mystery that has been floating along for two and a half books now, and it’s going to land on my unsuspecting MC like the proverbial ton of bricks.

Very quickly, it takes you into “write until you drop”… and into hating to sit down to write because there is no end in sight. Ever.

Having a standard daily word-count objective, and going to or over but not a lot over, is what I’ve found works best for me. It keeps the job joyful, and makes me eager to get up and get to work every day.