Today, the big cuts paid off big — the combat accountant, the buddy assassin, and 1254 words 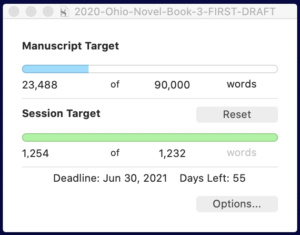 Back into positive numbers today, and it feels good.

And the story flew. My protagonist has discovered that to her astonishment, she is not as alone in the universe as she was led to believe…

… but discovers immediately thereafter that she is in immediate and deadly danger of losing this family she never knew she had. She calls in the troops.

And discovers she has at her disposal a combat accountant (nope, I will NOT explain) that her lawyer failed to mention existed — while the lawyer’s assassin bodyguard gets excited about the possibilities inherent in rescuing the family member. (He’s a very nice guy for an assassin.)

So. That was my day. It has been a good day.

Now off to do the rest of the stuff on the list.

Next post: Good words, a fun scene, and the very good tension of upcoming danger