Tiptoeing through the minefield… and being mocked by my Muse 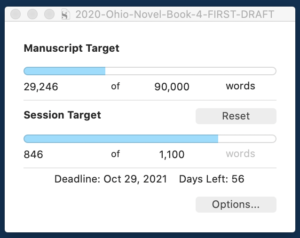 I’d hoped to get 1200 words net today, but after a workday that started at six AM and included very little sleep the night before, I’m going to take what I got and go do things that don’t require so much brain.

What I got, though…

I found out something absolutely enormous about the over-all series villain today — something that pretty much rocked my world.

Funny thing is, though, that this discovery is one of the sort that is going to require absolutely NO revision to get it to fit into the earlier books.

I have from time to time mentioned that while I’m writing, my Muse (the non-verbal part of my brain where most of my best ideas come from) keeps secrets from me.

Today I met one of those secrets — And this one was EPIC.

More astonishingly, I have been writing important pieces of that particular secret into the novel from day one, never recognizing the actual meaning of what I was writing.

This wasn’t a little mike-drop moment for my Muse.

This was that wicked elf dropping the mike, flashing his ass, and laughing like a loon. It was, “Hahahahahah! Sucker! I’ve known this all along.”

(Why was my muse male today? Don’t know. It shifts.)

Anyway, while I probably got my 1250 or more in real words written, my net gain was only 846. But with the Muse revelation, which was awesome once I got over the shock… I’ll take it.

It was a good, good writing day.

Next post: Three steps forward, two steps back: Ohio 4, Chapter 7… and done, I think, with stuff brought forward from Ohio 3