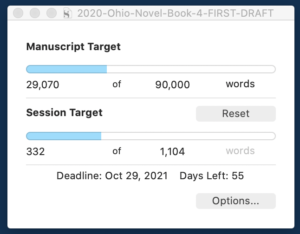 I am, much to my delight, just about out of the stuff I saved from Ohio 3 to use in Ohio 4. It’s good stuff, and reworking it so that it fits the current worldbuilding is interesting, and fun…

…But constantly ripping out old words as I insert the better new ones is not my favorite process.

First draft is — for me — about hitting my stride and telling the story the first time… meeting fresh new situations and seeing how they turn out.

And for the last week-ish, I have not been getting to do pure first draft. I’ve been doing “saving of stuff I wrote into the wrong book the first time.” Which is practical… but kind of a pain in the ass.

In the screenshot below, I have the first three chapters of Ohio 4 — all new material. Then PRE-A through PRE-D — all stuff that I just dragged out of Ohio 3 into this manuscript. Then chapters four through 7.

As of today, I’ve used everything I’m going to from PRE-A- PRE-C now. And just skimming through D before I wrote this, I think I can let that stuff go into the trash. None of it counts as words unless I move it into an actual chapter, so just dumping it won’t affect word count.

If I do that, tomorrow I’ll start in with brand new words… and I’ll get to start running again.

Oh, yeah. And writers who have more series-marketing chops than I do have suggested that I not completely discount Urban Fantasy in favor of Contemporary Fantasy just yet. From my descriptions, some have noted that it sounds like it could fit in with the older and broader definition of Urban Fantasy that started with Charles deLint and Peter S. Beagle…

So I’m going to hang fire on any hard classifications of this until the whole five-book series is done and revised.

Next post: Good progress, good conflict… and a whiff of destruction on the wind

Previous post: Tiptoeing through the minefield… and being mocked by my Muse