Three hours of writing, and the third first draft of Vipers’ Nest is now done! 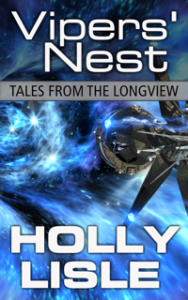 It’s really different this time. I ended up not using anything from the previous (two – sigh) first drafts.

The story focuses on Shay, Melie, Wils Bailey (THE Bailey from Bailey’s Irish Space Station), the station, Herog (and peripherally Cady), and on the PWAs execution of its plan to destroy both the Longview and Bailey’s.

Fair warning. This story has one tiny cliffhanger in it that will not be resolved until the opening scene of Wishbone Conspiracy, which will be the next Cadence Drake novel. If you keep the highlighted sentence in mind as you read Vipers’ Nest, it won’t be a cliffhanger.

So next week I’ll start on the revision. Will as promised revise the first chapter (or two) on video for the Patreon Hero level, and talk through what I’m changing and why.

Next post: Revision for Vipers’ Nest, plus building How to Write Short Stories