This Morning I Caught My Brain Doing Something WEIRD! 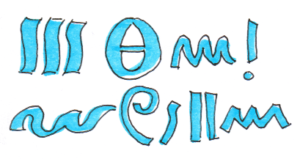 I woke up this morning from one of those dreams that seem to go on forever, where there were international spies and murders and I was a writer working on getting a lesson done on deadline, and for some reason, my lesson was interfering with the international spies, who’d sent someone to make me stop writing it.

The lessons I’m currently writing are about creating series fiction, and I’m guessing maybe international spies are tired of being the subject of so many thrillers.

Anyway, in my dream I was looking at the lesson I was writing while I was creating it…

And my Left Brain spotted something funny on the lesson, but kept its mouth shut. Apparently because if it had said something, it would have woken me up, and it wanted to know how the dream turned out.

(I beat the international spies. With some pretty cool martial arts moves. I don’t know martial arts, but, you know… My Dream, My Right Brain’s Rules.)

Here’s some of what my Left Brain spotted, written out as best I can remember it. 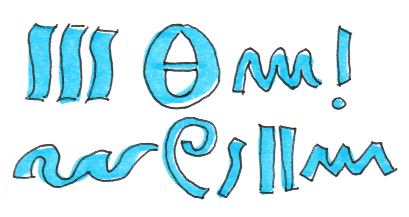 I did think it was funny that I recognized both the Greek omega and the explanation point, though, even while I was asleep.

And when I woke up, my Left Brain said to my Right Brain, “YOU CAN’T READ! You don’t even recognize real letters!”

Which is probably not completely true.

My right brain might be able to recognize letters it learned as pictures (like when I was a kid and drew cats in the shape of the letter C).

This is the first time I can think of that I’ve seen how my right brain sees letters, though, and had my left brain recognize that what it was looking at was not what my right brain said it was.

And my Left Brain has been an insufferably pompous snot all morning about this.

So — ever catch YOUR brain doing something weird?