The Wishbone Conspiracy: Cady comes up with a terrible idea — 2101 words 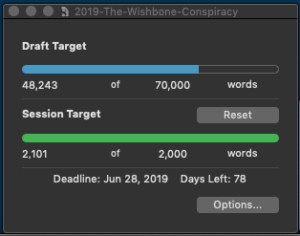 Today went well, and when I say that, I say it with a positively evil laugh.

The person behind the problem remains well hidden.

And Cady has come up with a dreadful idea that is the only idea that might work for solving the mass murderer problem.

I’ll note, however, that it is a very, very bad idea.

So I’ve just realized it’s about time to bring Herog back into the picture.

Next post: The Wishbone Conspiracy: The twist that took me by surprise

Previous post: And I’m back to fiction, and Wishbone… Kind of…