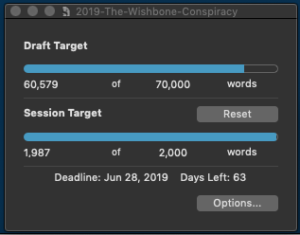 And your MUSE shows you a character you have been writing about in emails, and writing toward in this book…

Oh, boy… not even a little bit.

You read what you just wrote, and you think… “What the hell? Where did that come from?”

And you can’t even delete it, because it’s RIGHT.

It isn’t what you planned, but just as in life, fiction happens while you’re making other plans.

When your plans weren’t as good as reality, you just shut up and keep writing.

As for how this happens…?

The good, solid, gripping surprise that blindsides you, the writer, comes from your right brain asking questions you don’t hear, playing around with edges and corners of your story and your story world that your conscious mind isn’t considering, knowing things your Inner Editor doesn’t…

And when your Right-Brain Muse commits this startling change, your Inner Editor reads it, and instead of slapping the Muse with well-deserved admonishment for wrecking a perfectly good plan, it just mutters, “Damn, I wish I’d thought of that.”

And you end the first draft of your novel ten thousand words and about a week and a half early.

For me, ending short of my planned word count is not actually a problem.

I always run long in revision — always end up adding in scenes to create some foreshadowing for important bits (and today’s little revelation is going to need some of that) and tying things together, because I want to make sure my characters don’t drop, “Suddenly, TRAIN” on anyone’s head.

I am, in other words, not the jerk my MUSE is — the one who just dropped “Suddenly, TRAIN” on mine.

So for at least one week, I’ll let The Wishbone Conspiracy sit. Since I’m not on a hard deadline, I’ll probably be better off it I let it sit for a month.

And then, when I’ve recovered from the shock of actually being done with the first draft, and have had a chance to let all the words get cold, I’ll print it off and revise it.

As Fridays go? So far, this one is… remarkable.

Previous post: The Wishbone Conspiracy: 2014 words, and sneaking up on my ending