The Wishbone Conspiracy: 2094 words, and a bit of grimdark at the end 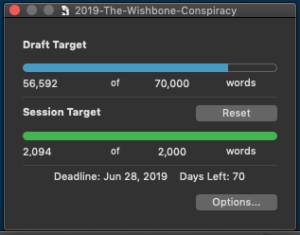 That’s been a theme lately. I love the words I got, but just getting started getting them was an uphill run blindfolded.

Once my guys started Shooting To Thrill, and came Back in Black, though, my fingers got moving and did not stop.

And at that point, I had the story twist on me in a couple of places and connect with my own childhood and personal experience at one point (look for the mention of Achilles tendons — I sliced my right one in two when I was seven, and pulled the details of the experience into a fight scene in this novel.

But this day’s writing went dark. A murderer was exposed, and with him the details of the murders. And (very light but suggestive) details of what the killer was doing while his victims died.

I creeped myself out.

Just saying… The places were I have said the least, like the Danya and the wolves scene in Diplomacy of Wolves have been the ones where I have taken the worst beatings from readers. In every case, it’s been because I have given no details, and have left my readers to fill them in from their own imaginations.

I suspect this is going to be another of THOSE scenes.

Next post: Ko-Fi Rewards: I forgot to add some rewards I loved to the questionnaire