I debated posting this.

It might not seem like it, but in a lot of areas, I’m a very private person.

And this story starts with a cancer scare, and switches gears bizarrely, and that isn’t something I’d generally talk about——but the fact is, no matter who you are, this post could help you and prevent a lot of pain for you or for someone you love.

So here’s what happened.

The Shit Goes Down

A couple months ago, I developed symptoms of colon cancer. Now symptoms of any sort of cancer are also generally symptoms of a million things that aren’t cancer, but if you value your life——and I value mine——the instant you experience the symptoms that could be something that MIGHT kill you, you have one sane option.

You IMMEDIATELY deal with the issue.

Now, I’m hell on wheels for skipping checkups, for avoiding medical testing, and for dropping out on age-group-standard recommended tests. I’m a retired RN, I detest hospital bureaucracy, and as far as possible, I avoid anything that might put me into the grip of this bureaucracy in world’s least desirable role: patient.

As long as I have no symptoms.

If you have symptoms, you IMMEDIATELY deal with the issue.

My symptoms started late on a Thursday night. Friday morning first thing, I called my GP and scheduled an appointment. The earliest one I could get was the following Wednesday. I continued experiencing symptoms up to and including the day of my appointment. Went in, talked with my doc, asked him what else it might be besides cancer.

He told me not to get ahead of myself.

I explained that my job as writer entails me immediately figuring out not just the worst-case scenario, but five ways to make that even worse. He laughed, I laughed. The truth is frequently funny, and there’s nothing like thinking you’re going to die to sharpen the edge on your laughter.

He got me a sit-down with a bowel guy the next day. I sat, he and I talked, I explained both my symptoms and my fears, and he scheduled me for an upper GI and a colonoscopy the following Monday.

You drink horrible fluids in vast quantities at timed intervals, you avoid barfing at all costs, you live on the toilet. ‘Nuff said.

It Ain’t Your Mother’s Colonosopy

Things have changed a helluva lot since I stood beside a fully awake patient on an ER stretcher and instructed him to “pant like a puppy dog” while a tube the size of a city sewer pipe was inserted into unmentionable places by a sweating doctor.

If you have to do this, the procedure now is:

You fall asleep.
You wake up.

Stuff on my insides were okay. No cancer there. BUT I had an atypical finding that required me to get a CAT scan. Might be we were still talking cancer, though of another sort.

Yippee. We scheduled my CAT scan for “soonest possible,” and on the appointed day, I got to drink barium.

And the WEIRD Results

The doc called me personally the next day to give me the results. Everything was fine. Well, fine for my age. I have a few normal “getting older” issues, but they’re no big deal.

Except, my doctor asked, did I know that I had a bad back? A really bad back?

If a doctor says something is “really bad,” he does not mean it in the way you mean it when you say “I have a really bad headache,” and two Tylenol fix the headache.

So I braced myself for BAD news.

I said I knew I’d had back pain since I was a kid.

What he told me wasn’t as bad as I’d considered it might be.

But it wasn’t great, either.

Turns out I’ve had scoliosis of the lower spine (Lumbar vertebrae 3 through Sacrum 1)——probably since I was a kid. I remember having awful shoulder pain when I was seven, so bad it made me cry. And I might have had lesser pain before that.

People who have idiopathic scoliosis generally know it. It’s a big deal, it’s visible with and without clothes, children are checked for it in schools when they’re young.

My kind of scoliosis——which turns out to be functional scoliosis from leg length discrepancy——is both fairly common and easy to miss. Mine is invisible externally.

But guess what. It’s capable of causing constant chronic pain including lower back pain, neck and shoulder pain, and migraines.

I did not have a single day or moment of my life from the time I was a kid in which my neck and shoulder muscles did not hurt. Folks ascribed this to me being tense. When I was a kid, I was told to quit complaining, to find something to do. When my back locked up, I lay on the floor with my feet on the couch until the pain lessened.

But consensus was that there was nothing wrong with me aside from the fact that I was a stressy bundle of nerves who would not and could not sit still.

Not so much, as it turns out. (Okay, I AM a stressy bundle of nerves who cannot sit still——but that turns out to be entirely unrelated to back, neck, and shoulder pain, and migraines.)

I figured out a free do-it-yourself test

The diagnosis on my CAT scan was “idiopathic scoliosis,” which just means “don’t know what caused it.”

But I was looking at myself in the bathroom mirror, and realized that my hips tilted just a bit downward to the left.

It isn’t anything I would ever have noticed, because it was a tiny difference. Only I’d been looking at my spine, trying to see if someone else might have noticed the problem just by looking at my back (the answer to this being, “Probably not”).

So I stood on my left leg and lifted my right leg.

Then I stood on my right leg, and lifted my left leg. I was noticeably taller. Did this a few times, went out and showed Matt. He said, “You’re bending your left knee.”

Only I wasn’t. We lined me up against a doorframe, and measured.

There’s half an inch difference in my height measured from left leg to right leg.

This is fixable, and the pain goes away 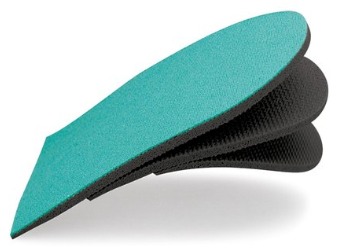 I decided to see what would happen if I just made my legs the same length.

I bought a few of the shoe lifts shown in the picture to the left (if you click the picture, it will take you to the actual product).

For the first week, my lower back hurt horribly, my upper back hurt even worse, and on day six of wearing the lift in my left shoe or slipper every waking moment, my entire back spasmed and I was back on the floor with my feet up on the couch.

Next day, though, the pain was gone. All gone. Lower back, shoulders. I literally cannot remember a time when my shoulders didn’t hurt. They don’t hurt anymore. My lower back hurts after I’ve slept from six to eight hours, but that’s because the spine is screwed up, and there’s some permanent damage there.

If you or someone you care about has constant lower back or shoulder pain, this is worth checking.

The test is simple. Get a ruler and a marker, and stand (or have your loved one stand) with back against the wall, shoulders back, chin up, ON ONE FOOT. Hold the ruler at a right angle to the wall, and mark the height (and the foot standing on). Then switch feet, and mark again. If there’s a discrepancy, this COULD be the cause of the pain, and a nine-dollar adjustable shoe lift might be able to relieve it.

Could the pain come from other things? Yep, and you’re responsible as an adult for getting yourself to a doctor to have those other things checked. If your loved one is a kid, get your kid to the doctor to see if there’s something better than a shoe lift that can be done to prevent the irreversible damage I have in my lower spine (L3-S1).

If someone had known to do this simple “stand on one foot” test for me, or even if as a young adult I had known to do it for myself, I would have spared myself constant pain for most of my life so far.