The Philosopher Gambit is off to the copyeditor! 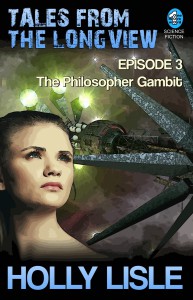 I’m having the folks at Silver Jay do an in-depth proofread for me—I’ll do the clean-up and publish when I get it back.

I’m considering offering a print version of the first three stories, which would give the reader the equivalent of a 90,000-word novel. I KNOW I’m going to offer this book later, when I have all six stories finished. I’ll put the series together in two volumes.

I’m starting in on Viper’s Nest tomorrow. I hope to have the story written fairly quickly, because I want to be able to start up Module Four of How To Write A Series, and I can’t until the demo story for that module is done. (Vipers’ Nest is going to be a particularly important demo—the whole focus of HTWAS Module 4 is keeping both writer and reader interest high in each episode of your long-running series, and I have a whole stack of techniques I need to demo in the story.)

The way things have been going, though, it will probably be six months before I have all three episodes that conclude the series available, because the HTWAS Modules take more than a month apiece, and the stories have been, too.

And I HATE getting something that ends on a cliffhanger, and having to wait forever for the next print volume to appear.

This is where ebooks have it all over print.

Anyway, that’s where I am today.