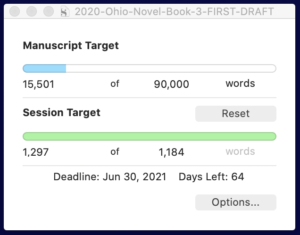 I’m still ahead of my target completion date for finishing the first draft, though I’m only gaining ground in little bites.

Little bites, though, are repeatable — and a lot more fun than running up against “to hit my deadline, today I have to write 10,000 words.” I’ve done that before.

It’s an exercise in misery that makes me hate the job.

Today the story is taking my main character into her family’s past — into the truth behind the mystery of her father’s identity.

The words ran well (though I started a bit late and pretty rough, and took more that three hours to get them), and now I can head off to do the rest of the day’s work.

Before I go, though, I discovered a feature of Fleeter that allowed me to make things on my desktop organizer easier to find. I discovered that the little icons in each box were optional. I wanted a way to differentiate between support documents, unfinished manuscripts, and the stuff that was either finished or absolutely critical to what I’m writing currently (for all future definitions of CURRENT).

So if you look at the third row, I now have my Current First Drafts of Ohio #1 and Ohio #2 in plain blue boxes without any icons. And spaces for the other three when they’re done to the right of those. Each, when hovered over, shows the complete text for the abbreviation. I’ve shown the detail text for Ohio 2 Complete Unrevised First Draft beside its box in the screenshot below. 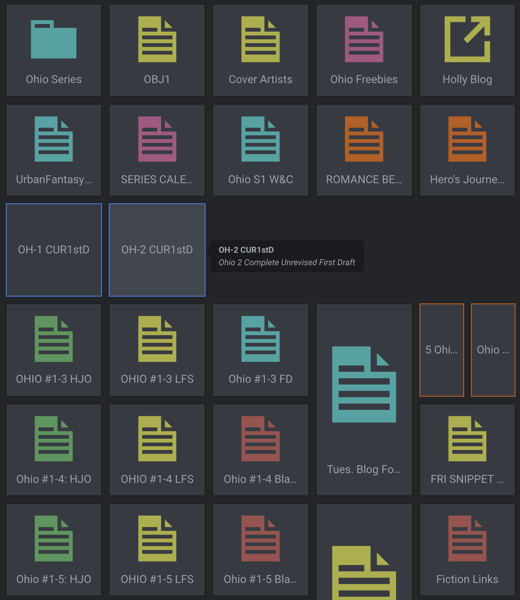 The two half-with boxes on the next row, lacking icons and outline in orange, are 5 Ohio Synopses and Ohio Titles Brainstorming.

So… hope you have a good weekend.

And (ONLY IF I DON’T HAVE JURY DUTY NEXT WEEK) I’ll see you on Monday.

If I do, both this blog and the Tuesday Writer’s Mailing List are going to be without emails for a week. (Maybe Longer).

I’ll post what I know here as soon as I know it.

Previous post: OHIO #3 – 1356 words and a strange but touching moment with my main character