The Ohio Series: Writing this one works differently 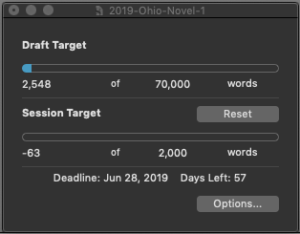 I mentioned that I’m going to have a different pseudonym for the Ohio series books (and I have real titles and a real series title for this project) — but all of that is staying under wraps until after I start bringing out the books and letting them find their readers.

But this is an odd project for me in another way, too.

I’m also writing these differently. I’m sort of collaborating with Matt — I’m doing the writing, but…

I’m printing off each chapter as I finish it, and putting it on Matt’s desk. He’s making notes in the margins, and I’m going back the next day and making changes the next day based on his comments, and then adding new stuff.

Well, we’re only on day two, so that’s how I think it’ll end up working.

This is something new for both of us, and yesterday he read what I’d printed off for him, and then thought about it, and we ended up having a long talk about the intro, the world, the worldbuilding, the main character, the magic…

Fun, in places really moving… we’re both pulling from deeply personal parts of our lives on this project. And what he brought to it yesterday gave me something so strong this morning that I ended up making myself cry as I was writing.

But I was pulling stuff out as quickly as I was putting stuff in. And at the end of two hours and change of writing, I was down a net 63 words. So this morning my little image shows a negative number.

Positive changes in the story, though. Something a lot better to build on in the weeks to come.

Next post: The Ohio Series: Worldbuilding toward getting the right magic

Previous post: The Ohio Series, Book One, and The Emerald Sun planning