The Ohio Series: TGIF, and the magic digs deeper 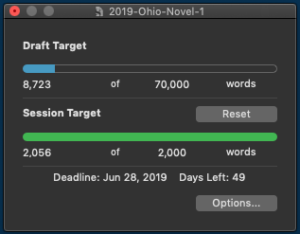 I made myself cry three times today in the couple hours I was writing my 2056 words.

I’m connecting deeply with the magic of a real and remembered place — with a town I loved, with a time I recall with a lot of powerful emotions.

I’m dealing with my connection to this story with my odd version of humor, but there are times when you’re writing along and being snarky and smartass, and you step right into a puddle from the past where you can put faces to names, can wrap the angle of a ray of light around the smell of a basement or a little bedroom, and suddenly you’re up to your neck in ice-cold memory. It’s a shock. A punch in the stomach, and you find yourself choking back tears at the sound of someone’s voice who’s been dead a long time.

The characters in this book aren’t me. They aren’t people close to me. No thin disguises, no ‘just the names are changed.’

I knew going in that the place I’m writing was powerful for me, so I made the people as different from me and folks I knew and loved as I could. But they have to live in the place, and they keep setting off memory minefields scattered around from this place I never wanted to leave.

I’m starting to understand what my Muse was keeping me away from in never writing about home.

But being safe is never good for your fiction. I’m seeing what I’ve been missing by not writing about home too.

My hero is a cop. She has a cookie recipe handed down to her from her mother, who got it from her grandmother, both now dead — and today she used a bit of cop-ness and the suggestion of possible cookies in the future to make the deeply disturbing discovery that the guy who has been claiming to be a lawyer isn’t one, and that there’s something weird about the cookies.

And since she knows what’s in them, and knows there are no bizarre ingredients, she can’t imagine why they have such a hold on the Old Guy.

But instinct tells her to protect this secret. That it matters.

But she isn’t going to… and the time when she can leave is growing shorter by the second.

What’s there? The secret this place is hiding? I don’t know. I’m getting hints of it as I write, the feeling from my Right-Brain muse that it knows.

I have no clue when I sit down to write what happens next. And I’ll note for the record that I HATE pantsing novels. So at some point, I’m going to work through a provisional outline, just so I have something solid that I can ignore and write against and fight with and argue with on my way to the story.

Because, dammit, the story here is big. Dark. Scary. Powerful. And the weird old lawyer who isn’t, and the locked freezer in the basement, and the fact that Tori’s mother’s room was stripped bare and wiped down and repainted with a glossy gray paint, but every item in Tori’s room is exactly where she left it when her mother took her away and went on the run, is a big part of what’s still hiding.

Previous post: The Ohio Series: 1977 words, with Tori and the snake in the canoe