The Ohio Series: Surprises and weirdness. 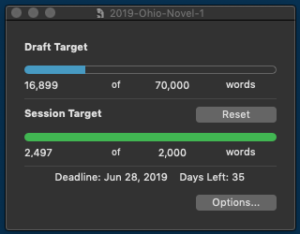 Yesterday was chaos, site issues over on HollysWritingClasses.com, and constant interruption, so while I worked on the book, I didn’t hit my word goal. I did get 1391 words, which is still good.

Today, though… Today was pure joy. I got 2542 words that just flew off my fingertips, and made me laugh as they hit the page.

Lemme give you a chunk of my morning (with the caveats — this is copyrighted to me, don’t quote, this is first draft and subject to change, don’t report errors because this is raw first draft):

There was a smaller box inside. It was bright green, with bold orange letters that said, “Instant Mover in a Box” and the contrast between the green and the orange made my eyes water just a little bit.

The picture on the box showed a can with a partially lifted lid, and suitcases, furniture, clothes, and other things pouring out from the inside in a steady stream. I raised an eyebrow.
Lifted the smaller box from inside the bigger box. It had a decidedly gag-gift look to it.

There was a note taped to one side of the box which read, Open this when you’re ready to be done with us. LOL! Love, The Gang

Somebody had gone shopping at Spencer’s.

Cops collectively have a weird sense of humor — it’s born of seeing humanity at both their absolute best and their absolute worst, from knowing what bullshit looks like from wading through it all day every day, from knowing that any moment of any day could be the instant that something benign goes bad and you end up dead without warning.

So whatever my comrades in arms back in Miami had put in the can was, I was pretty sure, going to jump out at me.

Or was going to smell terrible.

Or was going to make an incredibly loud noise.

Opened the box, lifted out the can, which did weigh just about enough to have something springy and noisy inside that was going to explode out at me when I opened it.

Again… not my first rodeo.

I sat on the couch, wedged the can between my knees, aimed the lid part toward the imaginary co-worker who’d bought it for me — probably Sarge, who fucking loved practical jokes — and lifted the lid.

And two things happed at the same time, neither of which included a spring-loaded giant paper snake or confetti.

A small, adorable, very alive kitten jumped out of the can.