The Ohio Series: Novel 1 – Friday snippet (a day early) that might not make the final version 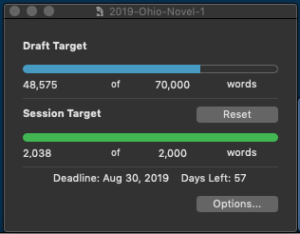 I’m going to note that the urban fantasy series I’m writing operates around the importance of trade.

That it’s an old system, and that it operates across multiple dimensions.

And that my protagonist is a cop, and the guy she’s working with is… difficult to get a handle on.

With that set-up, this is so offbeat and was so unexpected that it might have to come out of the final draft. It might not fit once I’ve done the final worldbuilding. But with the usual caveats:

This is rough, raw, first draft; it undoubtedly contains errors, and I do NOT make corrections from this draft; this material is copyrighted to me; do not quote or use in reviews…

The set-up is that my protagonist’s ally is explaining why he had to change his identity. Here’s the snippet…

“Building a network up from nothing is a helluva lot of work, though, and let me just say that the rewards offered by this particular world were… not enticing.”

“You ever see Star Wars?” he asked me.

“She looked a lot like Princess Leia, minus the sticky-bun hairdo. And was a real princess.”

“Then what was the problem?”

“She was a real princess. And a cannibal. She’d had two previous prospective bridegrooms killed and cooked when they failed to live up to her expectations.”

Every once in a while, the words that come out of someone else’s mouth are so utterly ludicrous that it doesn’t even matter if they could be true. Or might be horrible. The shock value of them catches you, and you crack.

I just lost it, right then, right there. Laughed my ass off. Had tears running from my eyes, had to excuse myself to go blow my nose.

When I got back, he was staring at me, an accusatory expression on his handsome face. “That wasn’t a joke.”

Yeah. It’s definitely out there.

In other updates, the Sweater From Hell required a complete rip back of the sleeve I was starting here.

Too much flipping of the whole sweater while knitting the sleeve in.

So now I’m doing it this way… 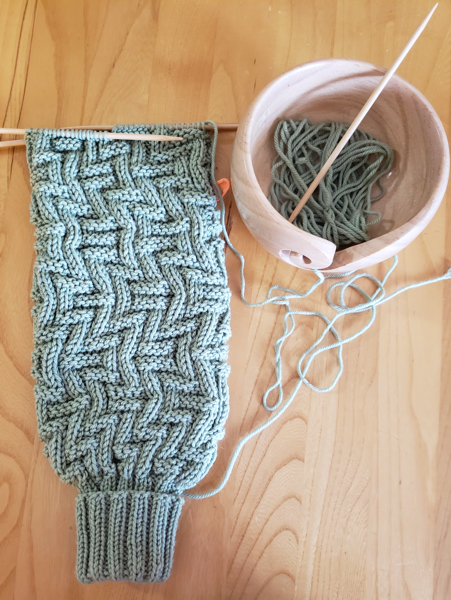 Faster, lighter. Remarkably, however, the 2/2/8 stitch pattern is still just as inconceivably frustrating.

Previous post: The Ohio Novel: Art of the Trade