The Ohio Series: Just a squeak short of the halfway point 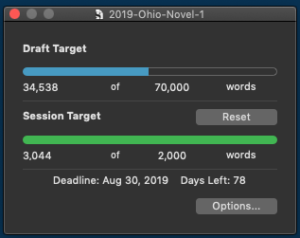 I got 3044 words even after yanking stuff out and taking second runs at it.

My protagonist has discovered something about herself that she didn’t know — at the same time that she wakes up in a stranger’s bedroom, sick and confused and with the ragged edges of a memory she cannot quite get to resolve. The last thing she remembers is being outside the library (where she’d been running when her memory blanked out).

Got to use some of the world’s magic today, got to deal with some of the folks from other places.

And I had a hard time stopping, but I still have a bunch of things on my bullet journal list. So on to the next.

Next post: The first Ko-Fi Rewards: Four of Five Winners have checked in.