The Ohio Series, Book One, and The Emerald Sun planning 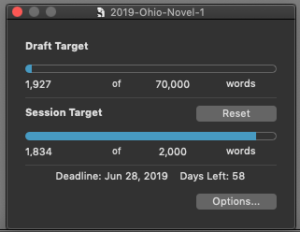 I’ve spent the weekend and the last couple of days trying to figure out my writing schedule. I ran out of The Wishbone Conspiracy before I planned too, and that has to sit in a corner being quiet for a month, resting and getting cold so I can get an objective look at it when I do the revision.

I have not had time to read through and build out the backstory details for The Emerald Sun, because I’ve been simultaneously writing first drafts of two novels plus the biggest writing class I’ve ever done. How to Write a Novel, of which I’m starting Lesson 35 as soon as I do this post.

So I had writing time today, and nothing I’d planned to write that I COULD write. Because of that, I started the first book of what is NOT going to be called The Ohio Series, but which is going to be set in Ohio.

And to my amazement, the novel started in a condo in South Florida with a young woman who, when an old dude showed up to tell her that her grandmother had left her a house, and who countered with, “I never had any grandmothers.”

And got weirder from there. By the end of the first scene, magic had happened, and I was hooked.

Got 1834 words by the time I finally pulled myself away. Not as many as my goal when I set up a stock template for 70,000-word novels last week, but way more than I’d expected to get starting cold.

On now to HTWAN Lesson 35: Writing Endings with Multiple Antagonists and Multiple Climaxes. Or what I call Playing on Hard Mode.

Oh, yes. Over the next several weekends, I will be reading and noting and worldbuilding from the first two books in the Moon & Sun series to get the voice of the protagonist back, and to plan out the final story. At the point where I finish the first draft of Dead Man’s Party, which will be in three more weeks, I’ll be ready to  start writing The Emerald Sun, which I’m considering changing to The Emerald Sky.

And I’ll have a space in my schedule ready-made for it. It can, as suggested by my daughter while we were working together today, become my next Monday novel.

Next post: The Ohio Series: Writing this one works differently

Previous post: Origin of the phrase WILD HAIR UP HIS ASS: a true story