The Ohio Series: 693 words, and What’s In The Basement? 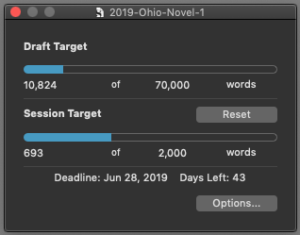 While I did not get a lot of words today — we have a bit of nice chaos going on here at the moment — the ones I got were good.

First, cookies rear their dangerous heads in my fiction again, this time cookies that apparently have just a hint of magic to them.

Second, I found out what was in the locked third freezer.

NOT what I expected.

Way cooler than what I imagined. So…

Here’s a tiny teaser from what I got today. Your set-up for the snippet is this — my cop MC is sitting on the lid of the third freezer in her dead grandmother’s basement, from which she just cut off a lock — and once she’s seen what was inside, is now holding it down until help arrives. Mr. Yeager was her grandmother’s lawyer. Or so he says…

A corpse, I thought, would have been a lot less worrisome. I would have known how to deal with that.

I had my cell phone in its holster. I pulled it out, and I called Mr. Yeager. When he answered, I said, “I have a deal for you. Go to a hardware store and buy me a keyed medium ABUS brass shrouded padlock, bring it to me in Grandma’s basement, don’t ask any questions about what I’m doing, and I will bake you a batch of cookies.”

I heard a pause on the other end. “How many cookies in a batch?”

Mr. Yeager still wasn’t convincing me of his lawyer-ness. But I began to see where he might play one on TV.

Previous post: The Ohio Series: 1408 words and a cliffhanger for me