The Ohio Novel: 1541 words, and the Friday Snippet 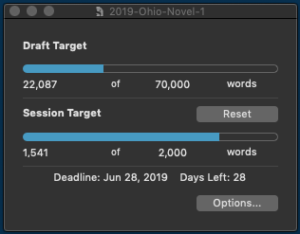 Today started with me building the How to Write a Novel class bonus.

I’m demonstrating my method for planning and then writing novels with multiple viewpoint characters and multiple conflicts. The demo uses four POV characters, and eight concurrently running plots, which probably wasn’t as complicated as the series for which I devised the technique — The Secrets Texts: Diplomacy of Wolves, Vengeance of Dragons, and Courage of Falcons.

Very happy with the way the lesson turned out. I have the video heading for the classroom next, and have the audio off  to the transcriptionist now, and should have video, transcript, and anything else I can throw into it into the classroom by the middle of next week.

There was a nice little local coffee shop half a block from the library with a good view of the street and my car. The guy, who had not yet given me his name, and I, who had not given him my name, had a tiny pissing contest over who got to sit facing the door.

“I’m a cop and I’m armed,” I said under my breath, so softly I was afraid he wouldn’t hear it.

He had good hearing.

“I think naming a kid Professor is a shit decision. It limits his career choices.”

The sigh with which I followed the silence was heavy.

At that, his mouth quirked in a half-smile. “Touché.”

I shrugged. Gave the waitress my order. Coffee black.

He ordered the same — no frappichino, no goopy latte, no whipped cream or flavors. Which didn’t fit with the turtleneck and the tweed, but did fit with that little martial artist stand-up he’d done.

So I said, “Want to take another run at the name thing?”

A little flash of surprise showed, but he hid that quickly enough.

Followed by, “She mentioned you,” which he said after thinking about it a couple seconds too long. He tried to make it sound casual, but it wasn’t. I could tell from the tension in his voice, the aversion of his eyes when he said it, the way every line of his body signaled tension that it wasn’t casual at all.

I halfway expected him to attack me, but instead, he met my gaze. Said in voice filled with phony casualness, “You have a chance to inventory her basement yet?”

What exactly did he know about her basement?

“Hmm. You probably ought to check the dates on everything in her freezers. Some of it will go bad if it isn’t used soon…” He looked me straight in the eyes and said, “Some of it might be going bad already.”

And I was pretty sure he wasn’t talking about the venison or the ducks or geese or anything else the local hunters had been providing for her.

But I wanted to be sure.

“I might have to go step by step through everything in there.”

He nodded once. Body language, voice, everything changed right then. It was like part of him relaxed — and another part of him tensed up. “Not without backup,” he murmured.

Finally, I now have to get a bunch of stuff ready for The Summer of Fiction Writing, which officially goes live tomorrow at ten AM ET, but which is already open for site members.

Login or create your free account, then come hang out with us in the SOFW Forum.

The official Classroom won’t open until tomorrow morning (lots of downloads and links in there), but you can get your goals put together today, and see what other folks are planning.

Next post: Replay: The kid who asked me about being a writer, to whom I gave blunt, honest answers

Previous post: The Ohio Series: Tori and the Townie