The DMP Revision, and the WRONG End of the String – Family and Brain Surgery 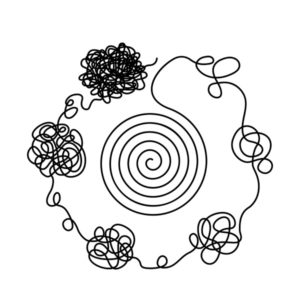 The string in the title is CHAOS, and in the little image on my blog, we are currently not in the neat and spiffy central spiral, but in the dark tangle out at the end.

I’ll start with the happier stuff. Today was Revision Monday, and I got just over half of the remainder of the write-in revision of Dead Man’s Party finished. Seventy-six pages revised and noted. Only seventy manuscript pages remain, and my hope is to be able to finish that on my next Revision Monday, whenever that might be.

The type-in revision is going to be a bitch, but I discovered that the stuff I wrote for the character who is going to be eliminated in the final version is actually excellent, contains very good conflict plus active worldbuilding for the story world, set in the near and deadly future, and can be given to the new male lead in the new version as the first couple of chapters of the novel.

The other news is more chaos, but not the good and happy chaos we’ve been in for the last couple of months.

My brother-in-law is back in the hospital following seizures, and has discovered that the parts of the brain tumor that his previous doctor couldn’t get out some years ago because they were attached to the brainstem have grown in the interim. Are now causing weakness in his extremities, seizures, some other not-good things.

On the bright side, brain surgery has improved a lot in the last half a decade. On the dark side, it’s still brain surgery.

SO… He has big brain surgery pending. This is not a little deal. It’s currently planned for Thursday, but that might change. So the next couple of weeks might have me gone a lot.

Previous post: The Ohio Series – Basements Can Kill You