The discovery of a beloved grandmother’s legacy 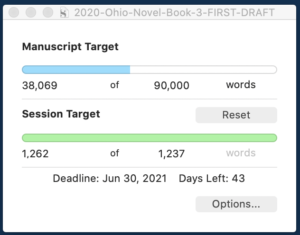 I was not expecting what happened to day. It wasn’t the sentence for this chapter in my life-for-scene outline — I had to write a new LFS sentence just to make sure it wouldn’t break the book when I started writing. But reworking the outline was definitely the right thing.

Along with meeting someone whose going to become increasingly important as the series goes on, my main character discovered that she only ever knew a very small part of who her grandmother had been.

Today, she discovered that one of the secrets hidden in the house she inherited had been sitting out in plain sight since she was a little kid…

And it’s still sitting there, waiting exactly where she left it.

And she’s now finished meeting the guy I’ve been waiting to introduce to her for two-and-a-half books.

Their meeting didn’t go at all the way I expected.

Next post: Brutal writing day. NET GAIN of 769 words, but to even get into a positive word count was a damn battle

Previous post: Ending strong on Friday: 1320 new words – 36,807 total – and a scene I’ve been waiting to write since I started this