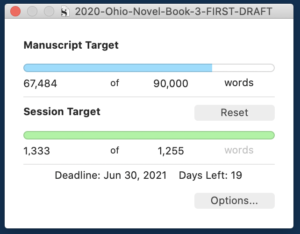 I’m now reworking every damn plot sentence, writing new ones before I get my words each day.

The series is gathering its own momentum, stripping off bits of “pretty” and “fancy” that I thought would have a place, and getting sharper and edgier as I go.

Lots of magic — but that is cleaner, simpler, and more straightforward that what I’d imagined and initially built.

The villains are gaining power.

The heroes are feeling overwhelmed.

And while the series isn’t unfolding exactly as I’d planned, when the villains are gaining power in the middle book, and the heroes are feeling overwhelmed, things are in fact going the way they need to.

And today, my MC finally visits her accountant. She’ll meet him on Monday — today she just made it past the secretary.

Monday, I think, is gonna be a LOT of fun.

A bit of extra for readers who like sneak peeks

I’ve argued with myself about including this in the blog:  It’s a bit of worldbuilding that I did that probably won’t end up in the book. As written, anyway.

I was working out the details of an important secondary character. The character is already there. Has been in the story all along, but invisible. Makes an appearance in Book Two, but not physically. It’s… complicated.

But I was trying to understand this character, and because the paper was handy and I knew I wouldn’t lose it, I started worldbuilding in my daily dot journal, and right in the middle of explaining what I needed to in upcoming scenes, the secondary character’s voice showed up.

Stand you then on this fair ground and call forth hell?
You do not know hell as I do. I am its beast,
And it has burned my flesh and ground my bones —
Devoured me, left nothing back but rage.

I know you, bitch — you pup of coward curs!
I’ve seen that face across a thousand years
And heard time and again your snivelling welp
With tail tucked ‘tween your legs…
And now I’m here.

I know your shabby soul, and I have come at last
To eat you whole, and cleanse us of your reek.

This is raw first draft, it doesn’t rhyme, and when I look at it, it’s simply a weird mood piece… and as I said, it probably won’t be in the book. At least not as poetry — and why the damn monster spoke to me in iambic pentameter I cannot even begin to guess. My mind runs in iambic pentameter on occasion, but again…. I don’t know why.

Anyway, I’ve already written this character into the story back in book two, I think — where I met it in terrible and terrifying circumstances.

And now it’s pushing to come back.

Next post: The combat accountant debuts peacefully… 1811 words, and 69,295 total

Previous post: Winging it: 1259 words, and chasing into the darkness.