The Church of Pizza

If you think Pizza Hut makes pizza, you won’t get this — but if you ever fell in love with real pizza, and then moved to a place where there wasn’t any, you’ll understand.

Pizza — for those of you who, like me, hail from the pizza-less hinterlands where your choices are limited to Pizza Hut, Pizza Inn, Domino’s, and stuff that comes out of a box — is an art. It is a science. It is even more than a bit of a religion. What it isn’t is sugary bread dough with ketchup spread on top. And after you’ve had the real stuff (for those of you who live in South Florida, Vito’s Gourmet Pizza, 1321 N University Dr in Coral Springs [(954) 755-3601], is a genuine shrine), you can’t go back.

So my guy is Italian on his father’s side. Close to the boat, knows where his family came from in Italy, can cook. Oh-my-God, can cook. And we’ve been yearning for pizza, because there is none here. We’ve looked.

Yearning, he found PizzaMaking.com, and discovered that, holy shit, you can worship at home. 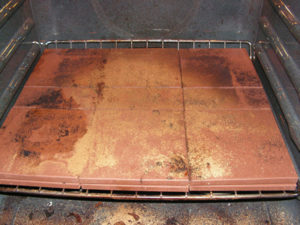 So first we made our own pizza oven. It tells how on the website, though it doesn’t tell how to cut tiles. That neat narrow row of cut tiles in the middle that make the tiles all fit? That was me, and I did that because I watched a guy tile the floor of a house I was buying about twenty years ago, and I remembered how he did it, and figured I could, too. And I tried it, and didn’t break a tile. Yes, I’m bragging. I’m damned proud of those tiles. I can’t cook, but I can do other stuff. (Oven photo is post-pizza, by the way — the mess is cornmeal, which is essential to the making of great pizza.) 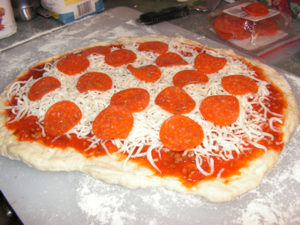 With the oven in place, my hero made pizza dough from scratch by hand — no fancy mixers or anything. Put together a number of lovely pies with various from-scratch sauces, because stuff from the jar doesn’t even come close to what he can do by hand. Loaded them up with toppings. 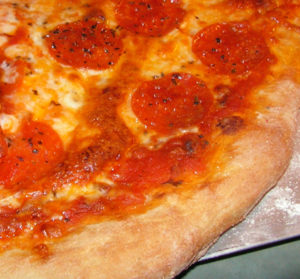 This beauty right here is one of his artworks. Usually we just have extra cheese, but this one he did with pepperoni, and it was really pretty. And tastes even better than it looks.

So here we are, with a home that smells like a pizzeria, with real pizza a couple of times a week so hot the cheese comes off in strings when you bite into it, with a crust that is both crunchy and chewy, and with slices that fold the way New York slices are supposed to fold, and …. amen. Is all. Just, amen.

Now I’m proselytizing for PizzaMaking.com, because I just know there have to be a few of you out there who know what you’re missing and are suffering. It cost us ten bucks for the tiles at a flooring place that had them left over from a job. That’s it. Ten bucks, plus ingredients that they even have here in the pizza-less wastelands, and we were on the way to heaven. We have a pizza peel and a good cutter on the way now, but you don’t need anything else. If you miss good pizza (or have never had good pizza), you, too, can be saved. Better yet, you can save yourself.