That RIGHT left turn in Albuquerque 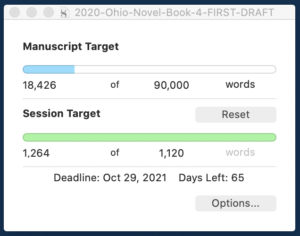 This was, overall, an excellent writing day, in which stuff happened that I was not anticipating that was way better than the stuff I’d planned. My characters were in trouble, one of them was in terrible danger… and still is…

BUT this was not the day I’d planned. It was better… but in the same way that when Bugs Bunny popped out of the ground to discover that he wasn’t where he thought he’d be, he discovered he was on the moon. Or a beach with palm trees.

I’m definitely not where I planned to be, but I am for damn sure someplace better.

I set out to write five urban fantasy novels.

I read a bunch of urban fantasy novels beforehand — some I really loved, and some I loathed… but I understood why each of them was urban fantasy, and what made them THAT…

And what I planned to write was that.

These novels are not that.

A simple left turn would have gotten me to urban fantasy.

But I turned some other way, and then a bunch of other ways after that. Up, down, in a spiral, then right, through a fourth dimension, up some stairs, left at a dragon, past the monk and through a nonexistent corridor that vanished behind me….

Whatever kind of fantasy I’m writing, it isn’t Urban Fantasy as defined by the state of the genre as it stands. Or ever stood.

Beyond that, I don’t know.

I got the words, and I love the words… but I’ve just discovered have I no clue what to call these words, since I am not going where I thought I was going, I’m not writing in the genre I thought I was writing, and the core story is not behaving as I expected it to behave.

So… I’ll just keep writing, and when I wherever the hell I’m going — well, maybe when I get there, I’ll figure out what to call this.

Previous post: PART ONE of the day: 843 words on Teaser Story Two