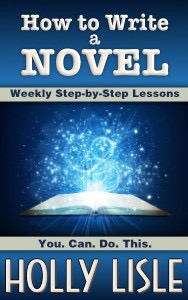 At the top of this (and every) page on the site, you’ll currently see a little timer.

Today is the last day of my How to Write a Novel Early-Bird Launch, where the price is about 50% off my projected final price once the class is done.

And as I write this, we’re down to the LAST SIX HOURS.

I have not flogged the launch — we’re close to Christmas, I know money is tight for most folks, I know most folks’ thoughts are going in other directions.

But I promised some of my writers who requested it that I’d give them another chance to buy the class for a low price before I passed the halfway mark creating it.

There are folks who have a dream of writing a novel, but I can say from experience (having shared that dream), that until you decide to do the work, it never stops being a dream.

And if this is a dream you share, my process will help you turn the dream into your reality.

STILL not going to flog the thing… I put up two downloadable lesson samplers that you can get here:

The timer’s going, and once the countdown is done, I will not offer this price again.

Right now, you still have some time, and can look over the first parts of the first fourteen lessons, missing, of course,

So the samplers are pretty thin. But they’ll give you a taste of what this is about.

And you can decide from there.

If this is your dream, though, I hope to see you in class, and help you make it your reality.

At 1:30 PM ET, Thursday. September 6th, I’m going to be taking questions on my upcoming How to Write a Novel class.

If you want to show up tomorrow to hang out, ask questions, and chat, join me here:

If folks show up (I’m not presuming), I’ll stick around as long as there are questions (up to two hours).

If not? Well, it’s going to be a very short live broadcast, because I’m just going in to talk to folks.

I finished my ghost story. Title?

The title means a lot.

I got it to Trisha Telep in time, heard back that I’d made the deadline—and we are NOT going to talk about the morning-to-next-morning hours I worked for several days getting that revision done. What was supposed to have been a 6500-word story that might creep up to 7000 words became a 12,000 word PROJECT.

But I love the story. And when The Mammoth Book of Ghost Romance comes out, it’ll be in there.

Meanwhile, with that done, I’m holding firm to my commitment to the Write A Book With Me project.

TALYSMANA is live again. I finished chapter 26, posted chapter 26, and am prepped to do 10 minutes or 300 words a day on this from now until I wrap the first draft of the project.

Post your wordcounts and progress to the most recent post tagged Write A Book With Me. I can’t promise to post every day. I’ll do my best.