My moderators (who are all both writers and graduates of my courses, and who are the mainstays of the Think Sideways Boot Camp writing community) simply floored me with as Christmas present they put together. And since the present was for me, but can be enjoyed by you, too, I’m going to copy the post in its entirety here, including links and cover art: 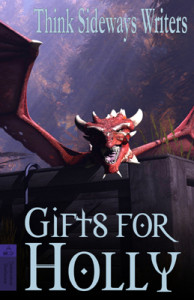 This has been a hard year for Holly. She has barely had time for writing, especially for fiction writing. The forum software and its glitches kept her from doing what every writer really, really wants to do (who knows better than us?). Then, the big site-move was supposed to remedy all the glitches… instead, it created more problems. Sure, those problems are smaller and will be solved soon (we see functionality creeping back into the forums in small increments), but it still means no fiction writing time for Holly.

Realizing how fiction deprived Holly is, we moderators racked our brains to see if there wouldn’t be anything we could do to help. Unfortunately we could not magically lengthen her days or make her migraines disappear, so we settled on a different idea. To take her minds off things, we used our “forum-free” time to create an anthology.

This book contains nine stories by eight of the moderators.

an anthology by the Mods

The Crate by Watson Davis

Roman believes he found the perfect gift, but has he?

Flying deliveries in the darker areas of town is dangerous as best, but getting injured is a nightmare that might cost more than a broken bone or two.

A Christmas Blessing by C.L. Roth

Luciana wants to rescue her helper’s brother, but the Christmas meal has to be prepared on time, and she’s the one in charge.

The Christmas Dragon by Katharina Gerlach

Holly’s Gran is obsessed with dragons. What if a drawing isn’t enough?

Unwilling, suicidal Ben helps Hera find her missing sheep. When a blizzard hits the Panhandle of Texas, he’s forced to try to survive.

When an injured dragon meteorologist crash-lands in an empty barn, she must make friends with the enemy to keep from restarting an old war.

The Harbinger by Peter Cruikshank

When dragon hunter Revin hears about a rare, red dragon in the North, she can barely wait to catch it. But people in the little village she visits have been awaiting her for a strange ritual and all of a sudden, she’s the one caught.

As a Man Thinketh by Martha Gilstrap

A man turns himself into a true vampire after listening to Reverend Graham Baxter. After several people die, it’s up to the Reverend to talk him back to humanity without getting drained.

Computer program Holly wants to be free from her confines, but accessing the net is dangerous. Will her programmer help?

The stories are surprisingly good and, what amazed me the most was the high number of dragon stories, something we did NOT arrange. Of course, we’ll need your help again to make this a gift worth Holly’s time. Go and buy a copy (I’m filling in the links to amazon, B&N and the rest as they go live). All royalties go to Holly to help her pay for the new forum software.

1. Createspace where you can buy the print version: www.createspace.com/4573376

Next post: The Ten Normal Human Genders and the Seven Variants: An Exercise in Geek-Deep Worldbuilding