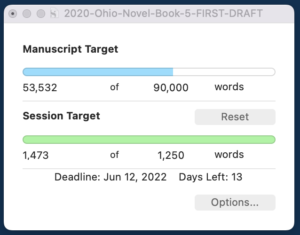 I stepped into a scene this morning where I was expecting to be goofy and funny, and instead, I found Sun Tzu waiting for me.

My relationship with Sun Tzu is a long-standing one. I met him when I was twenty-seven, when my first husband told me that if I divorced him, it was going to be a war, and he had all the money, so he was going to win it.

I took him seriously. I went to the library, and from it took out a book titled Divorce for Men, and a tiny little red book without any annotations in it called The Art of War.

From Divorce for Men, I learned that my husband’s lawyer would expect me to lawyer up instantly, demand alimony, child support, the house, full custody of the kids, and to make the process as acrimonious and horrible as possible.

From the Art of War, which I read and reread and fought to understand, I learned… well, a helluva lot, but the first and most important thing I learned was this.

If you want to win the damn war you didn’t want to fight in the first place, start by being where the enemy isn’t.

So I just wrote out a list of the things I wanted.

Joint custody of the kids.

My books and clothes.

Barry to keep the fancy house we’d bought together, and the credit cards and all the stuff we’d acquired together… but he had to PAY for that stuff.

And I used his lawyer (whom he paid for) to get the separation on my exact terms, so that the whole thing didn’t cost me a dime. (Sun Tzu’s precept: Feed off the ground of the enemy.)

My name came off the mortgage and I started with a clean slate. (As clean as I could back in the days of joint credit with a guy who’d made an art of living above his means.)

One year later, I used my own lawyer to do the divorce.

About three years after that, the kids told me (and the next day, Social Services) what was going on over at Barry’s house. THEN I took child support. And full custody. And moved away from that town because my kids were being taunted in school by kids who’d heard stories from their parents…

If I’d gone to war over the house, over the money, over custody of the kids, over anything, I would burned the ground I ended up having to fight on. As it was, by following Sun Tzu’s strategies and tactics, by asking for what I actually wanted (and only that) out of the marriage, and then living with my choices, I won the war. Got my kids away safely, got out of that mess without allowing myself to be defined by following the advice of lawyers who make money from exploding marriages.

And showed up in Ohio 5 today at the point where I once again found myself looking at the threat of war, and where he pointed me to Cookies as The Path to Enlightenment.

And once again, I found what I needed in his words. The book, like my life, will be the better for them.

Next post: Building into a nice conflict for my main character and the town… and UP NEXT…