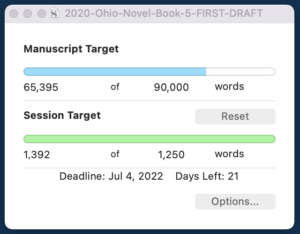 Today was a hoot.

Yesterday, I left my main in the middle of a situation that could have turned into a nightmare for her.

And I saved and quit for the day having no idea how I was going to handle it.

Today, though, the last line I wrote yesterday turned out to be just exactly right… because it could mean two completely different things at the same time, and it turns out I figured out a way to let it mean both.

Which SOLVED a situation that could have ended in bloodshed, disaster, and horror… and instead became pretty funny.

The truth underneath isn’t funny. It’s desperately important, and scary, and my main character both knows the truth and had a hand in engineering the plausible lie that’s covering it up.

She de-escalated the disaster down into “oops, it was all a big misunderstanding.”

And tomorrow, I get to bring out the truth, and start building toward the end of the novel, and closure for the fifth book, and maybe a slightly broader tie-up for the first five books of the series.

I have to wrap everything up with less than a third of the book remaining. So tomorrow, my objective is to let my mind wrap itself around creating the events that will conclude the novel, and tie up any remaining threads from the first four… and still leave myself elbow room for a bunch of stand-alones in the same world to follow.

And because I know not all of you guys are readers waiting for the book — some of you are writers watching what I’m doing (and some of you guys might be new to me) — I’ve covered in detail the way I’m writing these books in two classes I built:

How to Think Sideways: Career Survival School for Writers  … and How to Write a Novel.

I have a system. It looks pretty chaotic from the outside, but there really is a method to the madness, and it’s allowed me write books I’m happy with and hit my deadlines for about thirty-one years now.

Next post: Mwah-ha-ha-ha-HA! Evil is afoot, and fun is right on its tail!

Previous post: A Giggly Scene, A Wicked Secret… and I Love You, Tomorrow