Some days go more smoothly than others. Ohio Two Revision 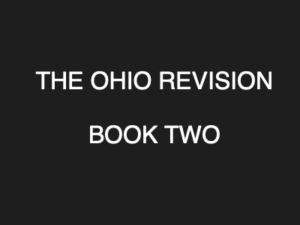 This is such a weird job. Going through the type-in revision of Book Two this morning, I both laughed my ass off and then cried typing in the same scene. That particular LONG scene, now revised, held up pretty well from when I wrote Ohio 2, though I had a couple of complex fixes due to a series-wide story physics decision I made while writing the first draft of Book 3.

When I hit the revision of the third novel, that particular story physics problem will go away.

For now, fixing it is a big pain in the ass.

STORY PHYSICS has absolutely nothing to do with the science of physics. It’s just the rules you decide to abide by when writing your fiction — and halfway through this series, I made a big decision to change how my MC can do a particularly difficult part of her job.

These rules have to do with story tone, and with the ways that things can or cannot happen, and in this case, they’re important to maintaining the funny…

There are certain elements that, when you introduce them into your fiction, require that the stories you’re writing then be read seriously, because those elements will ALWAYS be read as serious.

These are weird books. I hurt my characters a LOT… and a lot of what goes on in the books is deeply meaningful to me, and I hope will be to the eventual readers, too.

But my underlying tone in the world is humorous, and I had some things in the first draft of BOOK TWO that broke that. That took me out of the laughter in places where I didn’t want that to happen.

So… today that big change in story physics went in. I’m pretty sure by the time I was writing BOOK THREE, I’d already identified the necessary change in nature of the physics, and wrote that book and the ones following it to use the necessary new version of the rules.

But today had some twiddly bits and some finicky fixes, and I have a headache from keeping all the details straight.

So I’m going to check in on the forums, and then call it a day.

Next post: OHIO 2 REVISION: Made it to manuscript page 134 of the Ohio 2 type-in.

Previous post: So today I start the type-in of the Ohio 2 Revision