SNIPPET: Warpaint (or How Cadence Drake woke me at 3 AM) 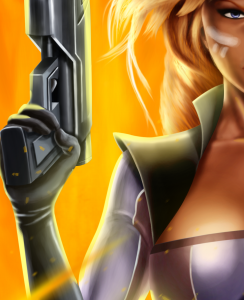 So there I was, sleeping, and into my mind crept the image of a glowing map, across which stains of blood slowly crept.

As dreams go, it wasn’t much, except that it woke me out of a sound sleep at 3AM, and told me something I’d desperately needed to know about Cady, the world of WARPAINT, and how they found out…well…what they found out.

I’m not going explain what this is. If you’ve read Hunting the Corrigan’s Blood, you’ll probably extrapolate. If you haven’t, you’ll still get the gist of this.

(And for anyone interested in WARPAINT’S progress, this morning’s session put me over 18,000 words out of 80,000 total.)

The map appeared across the forward viewports, suspended in the air, glimmering. Every known point in settled space was a glowing pale blue dot, and new blue dots kept blinking into existence, filling in black areas, spreading the map outward.

The map was a beautiful thing. It reminded me of dropping into the atmosphere above a big surface city at night, watching the lights glittering beneath me, knowing that those lights were the proof of human existence, of civilization, of the countless little comforts and joys that made life not just tolerable but good. Little red dots winked in and out across all of settled space, but in the first minute, two minutes, three minutes, nothing stuck.

At minute four, though, something changed. A red ring appeared around one pinpoint out near the dark edge of the map. And stayed.

And was joined by another, also out along the rim, this time a semicircle because nothing lay beyond the point of light.
And then a third.

By minute five, fourteen clear circles hung out along the periphery, limned out by multiple simultaneous connected hits, and I could see the sketchy shapes of red circles building around other settled areas closer to the civilized core.
Around me, I heard indrawn breath. From my own throat, a tiny whimper.

The map looped, and once again space was clean, marked by tiny flashes of red that that were coincidental. Or were related, but not yet definitive.

“Don’t make me watch it again,” the statistician begged. “Please.”

I understood. We had our proof that everything we loved had been invaded by a disease that was killing it. We were watching the death of not just one world, but proof of the danger to every point of human life, everywhere.

We stared at the end of everything.

Eventually I found my voice. “How does that match your numbers?”

“Six months may be optimistic,” one of the mathematicians whispered.

“We’re done,” the statistician said. “If someone had understood what this was the second it was invented, if someone had created countermeasures then, it could have been stopped.” He turned to me. “You want a timeframe?”

The ship said, “Captain, do you approve the request?” The statistician jumped.

“Yes,” I said, and told the folks around me, “This ship has the best AI available. As long as we’re in emergency lockdown, it won’t even get you a glass of water without my approval…but it will understand your requests, catalogue them, and run them past me. And I have it set to listen to and record everything everywhere.”

I’d had bad experiences born from assuming I knew who was on my ship, from assuming my security was sufficient. I didn’t make assumptions anymore.

The split maps overlay each other. The contrast from year four to year five was terrifying.

The statistician waved a hand over the map, muttering. I realized he was scanning the data points manually, which made sense since I had direct data access locked down.

He tapped his wristcom, and started muttering under his breath, and after a moment said, “Figuring for geometric growth without anything that pushes additional acceleration, we have four months, three days, twenty-one hours, forty-two minutes, eleven seconds Standard to total Darkout.” He looked from one to the other of his assembled colleagues, and said, “It has been a pleasure and an honor knowing you.”

And then he crunched something in his jaw, and his eyes rolled back in his head, and he fell to the floor, foaming at the mouth.

I picked him up—years of living and working at three Gs made him at the one G I’d set for my visitors a totally manageable, if floppy weight.

I ignored the shrieks. The shouts. I walked to the back of my deck, and hit the flat red panel in the wall, and my personal Medix slid up from the floor. The lid opened, I dumped him in, and while he was still twitching, jammed it closed. “Save him,” I told the ship.

And I turned to my future colleagues in saving the universe and said, “Anyone else want to be stupid? Because I’m not going to let you die. Mado Numbers might think the universe is already dead, but we’re standing here looking at each other, still aware and breathing, as proof that he’s wrong. And as long as we’re human and thinking and capable of taking action—any action—we’re going to act on the assumption that we still have time to turn this around. Until the instant in which we lose, we fight like we can win it all.”

Storm Rat said, “We don’t have a lot of time, people. So let’s get back to the labs and get to work.”

No one felt the need to say anything else.