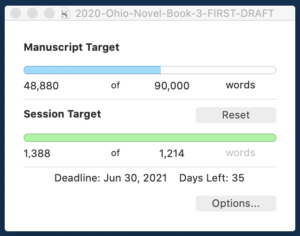 I’m pretty sure I’ve talked before about getting ideas about the day’s work while standing in the shower. Today was a spectacular case of that.

I’d thought I knew what today’s scene was going to be — it was dark, and grim, and scary, and I was all geared up to get in there and get the words, and as I was zipping through my shower (always the step before heading in to work), the still, small voice in the back of my mind said…

What if your Main Character in Terrible Trouble doesn’t go where you planned?

What if, instead, you make this one tiny change to what you were going to do, and see where that takes you instead?

I held that question in my thoughts as I zipped through the speed version of rinsing shampoo; ran a few possible variants on the tiny change while toweling off (though I’m pretty sure I removed some skin in my hurry to get to the computer); and hit the story where I’d left off yesterday with the new, better, tougher, more-difficult-to-write scene in mind.

I love what I got, in spite of the fact that by the end of it, I was typing through tears.

By chasing “what if”, and by then following the “who, what, when, where, why, and how” of that to their logical  conclusions, today I wrote my favorite scene in the series so far.

Previous post: My poor, poor characters! 1673 words, one scene that had my gut in knots… and a small and lovely win