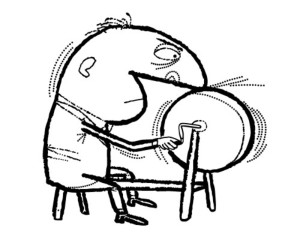 Picture of me in my office. Sort of.

I’m following up on the “How Would You Clear My Schedule” post.

First, INTERNS!!! was the cool and awesome suggestion that I leapt on, only to discover that the legal ramifications made it impossible for me to do. (Enormous thanks to Margaret Fisk, who did the research and let me know about this.)

There are folks actively hunting for ways to monetize the suing of folks who offer internships, so I killed the intern program. I don’t make enough to pay even one full-time employee at minimum wage, much less the numbers I need to actually get my out of print and “messed-up-in-print” work into circulation in a professional fashion.

PART 1: Working with Dan on software development for my new sites.

This HAS to be done, and it has to be done now. The most recent WordPress update broke HowToThinkSideways.com admin for a full week. Dan had to do major, major overhaul work to get it up and running for me again so that I could go in and fix accounts for folks and do the other things I do in admin. (Create products, set up coupons, kill spammers, add new pages for things like the live chats…)

I have to consider that the NEXT WordPress update is likely to not just break MY access, but everyone’s access.

So, as I said, this has to be done, and it has to be done now, and I am not a passive observer. I am wire-framing the designs for my future software, designing interfaces and front-ends and describing how I need elements to interact with users and databases. I am designing a fair amount of stuff that doesn’t exist yet, but so far, I haven’t done anything that Dan says is impossible.

I have most of the wire-frames that I think I’ll need done. As we build, and as we start bringing in live testers, I’ll have to amend things and I’ll have to add things. But Dan’s and my objective is to have me off of WordPress for good, and onto the software I need, by the end of the year, and sooner if possible.

So figure that I’m going to have to pull out all the stops for the fourth HTWAS demo story—Longview 4: Vipers’ Nest. AND keep it between 20,000 and 30,000 words, which is getting really tough. These things keep trying to turn into novels on me, and in the first three stories, I’ve already done the equivalent of one full-length novel.

PART 3: Working with RMW Beta Testers
What I’ve done instead is ask founding members of ReadersMeetWriters.com to beta-test the in-house certification courses I’m putting together for RMW, and to test the courses using my lessons, letting me know where there are problems, and letting me fix the courses while they practice on my books. That way, RMW members who take the training for things like Manuscript Layout and Cover Art Design will not have to get the versions with splinters. My volunteers are taking the pain for them.

I’ll fit in other things as I can, but getting my out-of-print stuff off of my hard drive is done, and delegated, and the weight off of my mind from just that is massive. If I can also get two stories written, and my part of the software development mostly finished between now and the end of June, I’ll be in much better shape than I was when I asked for help.

Thank you for your suggestions. I wanted you to see what I’ve done with them so far.

I’ll be back here when I’ve finished something. 😀

Next post: Helping to Clear Holly’s Schedule – Work on Her Systems

Previous post: Now available to everyone: The Indie Pub Live Chat plus links