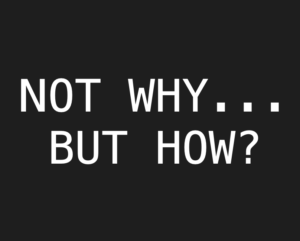 You grind. You dig. You read with increasing despair through a manuscript that seemed while you were writing it like a thing of wonder.

You wonder how you could have gone so far off the mark. And you think, “How did I think this was going to work?” and consider the possibility that you’re going to have to ditch all of Book Two, and write a completely different second novel.

And then, while hanging out with your guy while he’s shaving, you suddenly have this damned lightning-bolt-out-of-blue-holy-crap-why-didn’t-see-this-before revelation.

You were asking the wrong primary question about the second book.

To avoid spoilers, I’m going to eliminate the details, and just state that, looking at the story I’d told and where it went off the rails, I was asking a WHY question.

The SECOND I rephrased the core novel conflict question to make it a HOW question, the book worked.

Yeah, I’ll still need to do some revision. But my shifting the focus from WHY to HOW, this becomes a light, relatively friendly fix, where most of Book 2 is okay as written.

Revision is a bitch.

And then you walk away, let your brain wander off to do other things… and your mind relaxes, and lets go of all the stress and anxiety.

And an answer appears.

Very, very sideways thinking, this process. And it still feels like magic every time it happens.

Next post: Made it to page 188 on the write-in revision of Book 2

Previous post: Nope. It’s gonna have to be the HARD way.