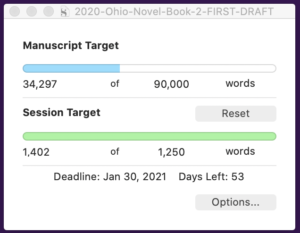 To say that I’ve been absolutely shitty about keeping up with the blog would be too kind by half.

I’ve been in Ohio now for a year and three months, more or less, and have written six posts since getting here.

One of them was about my fiction progress.

There have been some things that have gotten in the way, like Covid, and trying to revise Dead Man’s Party only to discover it wasn’t a book I wanted to have written, and working on the Ohio Novels, and the stress and depression that apparently has hit a lot of other folks besides me with Covid and lockdowns and a world that doesn’t feel particularly warm or welcoming right at the moment.

Doing a regular podcast also pulled from my pool of “time that isn’t writing fiction.”

But the thing is, I have been making very good progress on my fiction, and I suddenly realized that going back to posting that would let me share a bit of how this is going.

Because in spite of all the shit in the world right now and how it has affected everything else in my life, the Ohio Novels are coming along nicely.

Book One is done in revision, and is awaiting its final editor pass (from Matt) and me doing the typesetting, and then the bug-hunt. NONE of which will happen until the first five novels are complete and I have my small team of bug-hunter volunteers.

I’m currently doing a minimum of 1250 words per day on Book 2, Monday through Friday.

But coming only after the sanctity of fiction and the necessity of keeping technical stuff working with the nonfiction, I’m going to shoot for SHORT daily posts on the fiction, and will consider this a success if I accomplish a minimum of two or three posts a week.

I’ll include my little Scrivener screenshot of where I am at the end of each writing day for remaining four novels, along with a bit of “what’s going on in the writing or my life”, and occasional links to my temporary UrbanFantasyGirl.com site for readers who like that sort of thing and who think they might like these Ohio novels.

The Ohio Novels are going to be under a pseudonym well separate from the OTHER pseudonyms I’ll be moving to.

I am finally biting the bullet on the whole issue of using pseudonyms, which I’ve resisted for thirty years.

I am a broad writer, with a big backlist of fiction in many genres and an equally big backlist of nonfiction (though most of that is exclusively on my writing site, HollysWritingClasses.com), and I was the idiot who believed from the beginning that all my books should be under my real name.

Turns out, that’s an awesome way to guarantee you’re going to bring folks who love just one of your genres to a shit ton of stuff they’re guaranteed to hate.

Most of my pseudonyms are going to be public.

These books and classes are all already out there, I have already wrecked their find-your-perfect-audience hopes and killed their Amazon also-reads, and while some day I may successfully clean up that mess, these books can’t be my priority. Hoping to get them to sell better is going to be like towing big iceburgs with rowboats.

I’m going to have to re-cover, re-blurb, re-link, re-promote, and bring in the new pen names WHILE writing fiction full-time AND taking notes for the update of my How to Revise Your Novel class, and none of this stuff is going to happen overnight. It’s a process.

My urban fantasy Ohio Novels, however, are NOT going to be under a public pseudonym for the initial book launches. (There’s nothing I can do to keep folks from outing my pseudonym eventually, but at least I can give the Ohio stuff a chance to build an audience that doesn’t also bombard them with everything else I’ve ever written that they would hate.)

I’m going to give them the best chance of finding their perfect audience that I can manage.

You can see by today’s screenshot exactly how far along I am in Ohio #2, and what I’ve done so far today. It’s not mammoth progress, but done consistently, it does add up.

And that’s where I am right now. Stressed like everyone else, doing five days a week of manageable word counts on the second of five books, having the occasional day where the words actually fly…

And now once again taking my fiction-writing process public in small and manageable ways. And, I hope, reconnecting with some old friends who used to hang out here with me.

Next post: Help I didn’t ask for… a long slog ahead to fix what a “helpful” company irreversibly broke

Previous post: After the Podcast: Fiction for readers, help for writers