Rediscovered Worldbuilding Workshop: Holidays in Hell and Other Delights 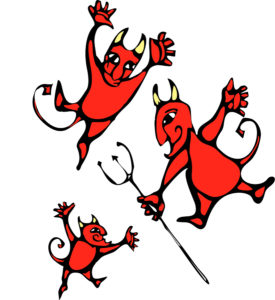 I was doing a BIG search on my hard drive for something I’d previously written about Tangerine, who was a minor character in Hunting the Corrigan’s Blood  who became a major character in the current novel, The Wishbone Conspiracy (for which as I blog this, I have not yet gotten my full complement of words for the day…

When I tripped over a handful of old workshops and articles I’d written for Vision, back when Lazette Gifford was editing and publishing that as part of my Forward Motion site.

Most of them are already in place on the writing pages.

But one of the ones I hadn’t yet reprinted was Holidays in Hell and Other Delights: A Worldbuilding Workshop.

I got a wee bit sidetracked with that, and am now getting back to my fiction, STILL not having recovered a big chunk of writing I did on the novel that actually featured Tangerine (that isn’t his real name, by the way).

I put that up so I wouldn’t forget it, and am posting here so you won’t miss it. I was pleased that the quality still held up — it’ll be useful for those of you who write fiction and need to build in some little pieces of worlds to give them added depth and verisimilitude.

The link again: Holidays in Hell and Other Delights: A Worldbuilding Workshop

Next post: The Wishbone Conspiracy: I discover Tangerine’s real name