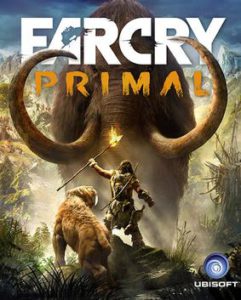 I play video games in my free time, and decided to try Far Cry Primal. You start out as a young black male — bit of a shift for me, because I prefer to play as a female when the option is offered. In Far Cry Primal, it isn’t. I mention the race of the MC here because it becomes an issue later in this post, so it’s relevant going in.

First, though, let’s establish the setting, because the setting plays into this enormously.

The game starts well. You learn to kill a Woolly Mammoth, pick up the torch for your fallen leader, head out into the wilderness to rescue your people and bring them together.

So. What does Introduction With Woolly Mammoth tell you?

That this story takes place in the temperate northern hemisphere. Start with the Woolly Mammoth’s largest distribution. This is all the area in which Woolly Mammoths appeared.

So eliminate North America as the possible location of this story.

So far, so good. At this point, it can take place at any point in northern Europe or Northern Asia, both places with large northern hardwood forests.

So far, I was having fun with the game.

The problem came a lot of hours in, when something that had been pinging at the back of my brain suddenly moved frontward.

Along with all the big predators chomping on you with astonishing regularity, there were these Crazed Neanderthal Killers who came out of the brush to attack with homicidal mania, intent on slaughtering you and all the women and children you were trying to rescue.

And while all the good folks in the story are dark-skinned, every fucking Neanderthal-esque nightmare of homicidal insanity is a light-skinned, kinda-hairy Northern European dude.

Why do I now stake the location in Northern Europe specifically?

Because here’s the known range of the Neanderthal — Northern Europe and the Middle East — and while the skin color of the Neanderthals through its extended range is pure conjecture, LOGICAL conjecture notes that the purpose of very light skin is to toughen skin and nails by increasing keratin, and to facilitate the absorption of Vitamin D in low-light areas.

The Middle East is gets sunlight pretty much straight on. Northern Europe gets it at a sharp angle where more bounces off the atmosphere, and has half a year when it doesn’t get sunlight for all that many hours. (Used to live in Alaska — I learned how this stuff worked when I was nine and ten.)

Very light skin has zero survival value in places that get sunlight straight on.

So by process of elimination, this is Northern Europe.

So here’s the actual story. Africans are invading the homes of Northern Europeans.

So this story is actually about Hairy White Neanderthal dudes who are attacking the invaders to protect their homes and families, told from the point of view of the invaders who are portrayed as heroes.

However, there are no Neanderthal women or Neanderthal children in the game (at least as far in as I played). I guess including them would have made a bit more obvious the racism built into the game. If you were also slaughtering the light-skinned women and children along with the big white guys, someone might make a fuss about that.

But — and again, I have to note that I ditched this game pretty early in — (contrary to archeology and DNA testing, which demonstrate that the Neanderthals interbred with modern humans, and vice versa, across three separate “out of Africa” migrations) when you portray pale-skinned Neanderthal males as crazed killers who must be slaughtered by the dark-skinned heroes, everyone is apparently okay with that.

I looked all over the web for anyone else who had noticed this, and there wasn’t a peep.

My question is this:

Why hasn’t Ubisoft been called out before now for THIS egregious racism?

There is NO acceptable racism.

My response? I have taken the only three options that are given to me.

While I welcome comments on this article, READ THE BLOG RULES ON POSTING

If I would have found things changing had I played longer, and if the story got to a place where the indigenous folks and the invaders were living in harmony together and interbreeding to build a new and better humanity, let me know. I’ll re-upload the game, play through to the part where it gets good, and withdraw my comments and observations.

Next post: What writing question haven’t I answered yet?