Post-Vertigo: The Ohio Series, Novel One, and shifts in the story 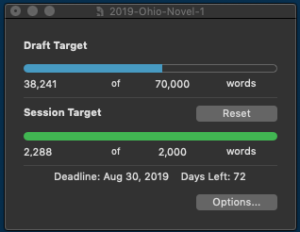 Had a rough last couple of days due to BPPV, but thanks to the Half-Somersault Maneuver, today I’m okay again.

And I had a great writing day, with a few caveats.

I created a character in the first half of the book that has to go. This character would have (or COULD HAVE) made things too easy for my protagonist, and easy is never good in fiction.

I’d countered the “character knows all the secrets” problem by making the character an obstinate jerk — but obstinate jerks are tiresome to read, especially in series fiction.

If I made the character likable, or even sane (since what my MC is doing is desperately important, and being the obstacle in the way of that would be suicidal), my MC would have no obstacle to discovering all the crap that’s going on.

I have the right main character. My MC is, as all good MCs are, the person who knows the least in this situation… but I have eliminated (in my thoughts and daily provisional outlining — eliminating what’s already written will have to wait for revision) the character who knows everything.

I have substituted this character for two people who each know just pieces of the puzzle. And a library full of books mostly written in languages my MC cannot yet read — a lot of which are not even languages from this world…

It’s a nice little library, but my MC is going to have to figure out her own way through a lot of the crap that’s now falling on her head.

She doesn’t yet realize it, but the most important question she needs to ask now is, “Why did the thing that tried to eat me explode?”

It’s a good question. Because, however, she has a whole lot of little fires igniting all around her, the point where she gets around to asking that one is going to be a long time coming.

I’m really happy. Got 2288 words today, and they felt like they were flying. With the know-it-all gone, the story is back on track. And I’m having a wonderful time figuring out what happens next.

Next post: How to Write a Novel, Ko-Fi Redraw Tomorrow, and in the Ohio Series Novel today … more questions, no answers