Post-Cut: Pizza and Ice Cream for the win! 1338 words, and a better direction 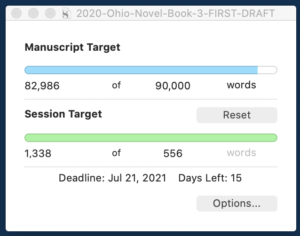 So again, here’s where I started:

At this point, I think I have a reasonable chance of actually finishing the book in 90,000 words rather than 110,000, so I reset my counter back to 90K, reset it again so that I was starting at zero words from the new target, and started writing.

And this time, the story stayed weird, and funny — but in the dark and dangerous way that I need for the ending of the middle book of the series.

I still have all those other words over in my Book Four Scrivener document, and while I have them in there as the first two chapters, I’ll probably end up doing a new first chapter, and bumping them down to two and three.

With all the math fiddled and fixed, I got better than my planned words for the day, have a much better focused scene that drives me toward the already written ending of this novel without sidetracking…

As things that need to happen at the pivot in a middle book, I’m really pleased with how this is now working.