Pensive Ruminations on Impermanence in a Technophilic World

I’m so happy to finally be able to reprint this poem.

This is the second piece of professional work I sold. The first was To An Android Lover (and Charles C. Ryan, editor of Aboriginal SF bought them both at the same time, for $25 apiece.)

(with apologies to Shakespeare and Andrew Marvell)

When I consider every key I touch
Retains data mere fragments of a minute;
Or that this monitor shows only such
As have survived the trip through circuits in it—
I know, like men, computers multiply,
Grow and learn and daily stretch their scope,
And just like men, computers also die,
Crashing in ways that crush and kill all hope—
Oh, then the conceit of my desperate plan
To trust my words, my soul to this machine–
To send my thoughts through bits and bytes and RAM
And deadly hardware seems insane, obscene.

The hard drive is a fine and speedy place
But ink’s a whole lot harder to erase.

Published in the summer of 1992 in Aboriginal Science Fiction.

I’d lost my copy back during my first divorce, and had never memorized the poem, so unlike its sibling, it was—I thought—gone for good.

Until about a month ago, when out of the blue I suddenly wondered if anyone was selling copies of the old Aboriginal magazines on Ebay.

Turns out they were, and I did a quick trip through online search for the date of publication of my poem, and bought the relevant issue (for slightly more than I’d originally been paid for the poem). And after years and years, here it is. 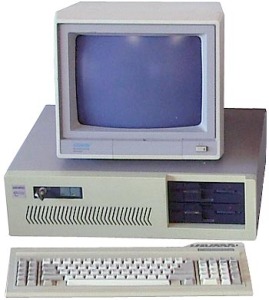 At the time I wrote it, I was working on my old Kaypro 8088, and Wordstar.

And frankly, back when I wrote this, I didn’t know from nuthin’ about having a machine eat my words.

That had to wait for my 286, and then my 386, and then my 486, all of which ran Windows and featured the Inevitable Blue Screen of Death that made CTRL-S an every-minute nervous twitch that I probably carried out even in sleep.

My first Mac, running OS X 2, put an end to the word massacre. I haven’t lost anything in about 15 years now.