Origin of the phrase WILD HAIR UP HIS ASS: a true story 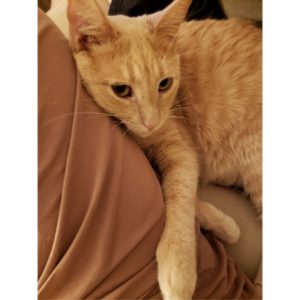 I ended up looking up the origin of the phrase “wild hair up his ass” this morning, and discovered there is shit-all about it on the internet.

This in itself is astonishing — it’s the INTERNET, you know? It knows everything. But apparently not.

ORIGIN, folks. “This is what a phrase means” is not the same thing “where the fuck did this phrase come from?”

But now, my friend, I have discovered the origin of this phrase I’ve been hearing folks say my entire life.

I was in the bathroom this morning getting ready for work.

My cat was in the bathroom using his litter box.

And all of a sudden, he leaps out of the box, runs in tight circles in an absolute panic (which in a bathroom that small is a good trick), and comes to a skidding stop in front of my feet, at which point he crouches, body rigid, eyes black, ears locked back, tail whipping back and forth like we are both about to be devoured by aliens only he can see.

I look around to see what scared him.

I bend over, rest a hand on his shoulders, assure him that everything is okay, that he is all right, that nothing is going to get him…

And he relaxes, rolls on his side…

Which is when I spot about an inch of cat turd hanging from his butt, suspended as if by magic.

Probably NOT magic, I think, and grab a piece of toilet paper, and give the turd a gentle tug…

And slowly remove what’s holding it there, which is about six inches of one human hair.

Mine. Matt shaves his head, Joe keeps his hair short.

Guess who had a wild hair up his butt?

So now he’s calm, happy, purring. I pet his little fat head and kick him out of the bathroom, and get my shower.

Which is when I look up, and see the lizard hanging on the drywall above the tiles, eyeing me.

I just keep taking my shower — I spent time as a kid in both Costa Rica and Guatemala, and I have shared showers with scarier critters than that.

At least until this one dropped of the wall to the floor of the tub, and I did my own version of a “wild hair” dance.

Next post: The Ohio Series, Book One, and The Emerald Sun planning