One step forward, two steps back — and the middle part of the middle book of the Ohio series 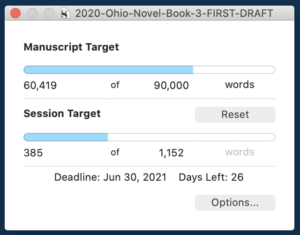 Yesterday after I finished writing and shut down for the day, I ran through what I’d done and realized that I’d introduced an element into my story that would, if I kept writing it, take the series in a wrong direction. I hated where the series would go with if I held onto those words. When I followed them to their inevitable conclusion, the worldbuildng they introduced would make me hate the series.

Today I went in, dropped back to yesterday’s words, read all the new stuff, and saw that the damage was more extensive than I’d imagined. Having a pretty good idea of where I wanted to go, I started cutting, and then writing in new words.

Fixing. Worldbuilding. Replotting, and then writing in replacement material…

And fixing came with a hefty price tag.

Today, I cut out the smallest amount I could (good surgical practice — don’t remove healthy tissue).

And then ran into the event cascade from my decisions yesterday.

Had to cut more.

And at the end of three hours, I game out of the mess with 60,419 words total, a net gain of 385 words, and I THINK I’ve removed all the clots and twisted, inflexible scar tissue, and necrotic crud, and anything else that might leak poison into the rest of the series.

I say this knowing that when I come back in tomorrow and do my read-through of what I wrote today, I might find some shit that is still leaning on what broke, and that’s going to have to be ripped out or restructured.

Was not a great, awesome, joyful day. But fixing what broke is part of the gig, and fixing it before it has a chance to break the rest of the series was the best outcome I could hope for.

Previous post: 1131 words in the wrong direction: I just caught what I was doing, and I’m going to start off tomorrow by ripping back